Automotive manufacturer of Cleveland.United States from 1900 to 1997. 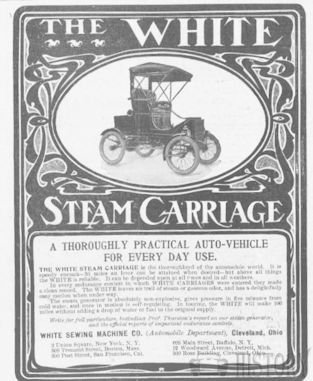 The White Motor Company was a major US manufacturer of steam cars and later of trucks and other vehicles for the most part of the 20th century.

The origin of the company was in 1876 the founding of the White Sewing Machine Company by Thomas H. White and William L. Grout in Cleveland , Ohio . At first only sewing machines were produced. This business was later continued under the name White Consolidated Industries (WCI). This company is today part of the Swedish group Electrolux .

The production of passenger cars started about 1900, when the three sons (Windsor, Rollin and Walter) joined the company. The first automobiles had a two-cylinder steam engine with chain drive. Vehicle manufacturing became legally independent in 1902 under the name White Motor Company. The company developed very successfully. Over the next few years, around 10,000 steam-powered automobiles were produced, more than Stanley Steamer, a company better known in the sector .

1909 was the change to gasoline engine. The last steam engine was manufactured in 1911. In 1910, the first gasoline-powered truck was produced and this product line quickly became a success. From 1918 the company concentrated entirely on the production of trucks.

In the 1920s and 1930s, White Motor Co. developed into a leading manufacturer of trucks in the United States. In 1932, the Indiana Truck Corp. acquired and relocated their manufacturing to Cleveland. During the Second World War White developed and produced armored military vehicles, including the White M3 Scout Car.

In 1951, White took over the sales and service for Freightliner Corp. products  under the name "White Freightliner". Other competing companies were acquired: Sterling Trucks (1951), Autocar Company (1954), Diamond T (1958) and REO Motor Car Company (1961). These acquisitions were partially continued as stand-alone brands under the name "Autocar" and "Diamond REO". From 1968 to 1977, the manufacturer Euclid Trucks was also part of the White Group. 1968, the business branch Western Star Trucks was founded, which should supply the American West Coast. The collaboration with Freightliner ended in 1977.

In 1980, White got into financial difficulties and had to file for bankruptcy. In 1981, the White truck production was taken over by Volvo without Western Star Trucks and sold in Volvo White Truck Corp. renamed. The brands White and Autocar were initially continued. In 1988, the merged to General Motors owned GMC with their heavy loads and Volvo White to the new brand name WHITEGMC. All other brand names except Autocar have been discontinued. In 1995, the brand WhiteGMC was changed to Volvo. In 1997, Volvo took over all shares in the company. The brand name "White" then disappeared completely - since then all products of this company carry the name "Volvo". Seat of Volvo Trucks North America Corp. is today Greensboro (North Carolina) .The White Motor Company took over various tractor manufacturers in North America in the 1960s, eventually leading to the founding of White Farm Equipment .