Automotive manufacturer of Wisconsin.United States from 1906 to 2010. 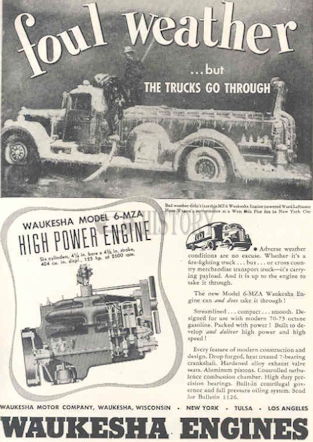 Waukesha Motor Co. Founded in 1906 in Waukesha, Wisconsin . In the past, smaller engines were also built , including automobiles from 1906 to 1910 , commercial vehicles and tractors.

The company was founded in 1906 as the Blue Front Garage by Harry L. Horning and Fred Ahrens , who were previously hired as chief engineers and mechanics at Modern Steel Structural Company . In their free time, they had repaired the engine of their boss's yacht and came up with the idea to develop their own engine. Until it was ready for the market, they repaired, serviced and stored customer vehicles at their North Street facility . An investor was also found with the farmer Allan Stebbins from Wales and the company was reorganized as Waukesha Motor Company .

As early as 1908, the city of Chicago had acquired a Waukesha engine for a fire truck. A number of car and commercial vehicle manufacturers subsequently used Waukesha engines. Soon, the existing facilities were too small a new building was built on the West St. Paul Avenue . 1916, Waukesha campaigned for large- boretractor engines of ( bore × stroke ) 3⅓ inches × 5¾ inches, resulting in a displacement of 383.9 ci (6291 cc) to 4¾ inches × 6¾ inches resulting in a displacement of 1098.7 cc (18,004 cc).

From 1917, Waukesha participated as one of several engine suppliers on Liberty truck program of the US government. The Liberty army truck was built to specifications of the US military by numerous commercial vehicle manufacturers; The purpose was to provide as many vehicles as possible as quickly as possible to the USA and its allies that had just joined the First World War .

In total, 15 US manufacturers built such military trucks that formed the backbone of the US Army.

Waukesha also supplied the US Army with engines in large numbers during the Second World War.

In 1957, Climax Engineering Company was acquired in Clinton , also a manufacturer of large engines. In 1973, the company was sold to the 1955 Tulsa founded Arrow Engine Company .

In 1968, Waukesha Engines was bought by Bangor Punta .

In 1974, Dresser Industries acquired the company and incorporated it into the Group as Waukesha Engine Division.

In 1989, the Dutch engine manufacturer Brons Industrie NV was acquired.

In 2010, Waukesha Engines was acquired by General Electric (GE). 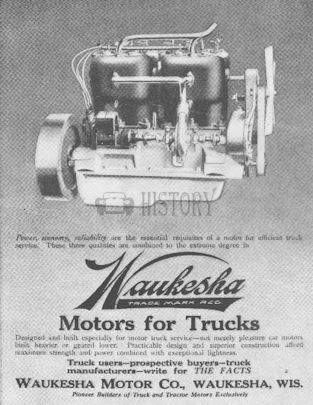