Automotive manufacturer of Tiffin , Ohio .United States from 1916 to 1923 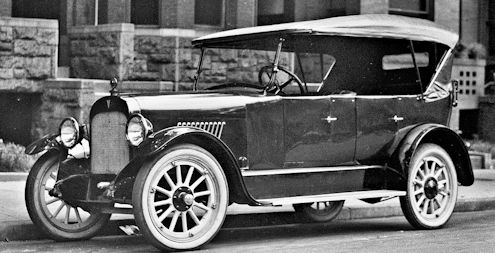 Vogue Motor Car Company , emerged from the Economy Motor Company ,and was an American manufacturer of automobiles .

The Economy Motor Company was founded in 1916 in Tiffin , Ohio . HE Cook, CJ Larger, Stanton J. Lewis, John A. Manecke, Raymond W. Miller, and George Wiseman were involved. Wiseman was the designer. They started with the production of automobiles. The brand name was initially Economy .

In April 1917 it came to the merger with the Bellefontaine Automobile Company from Bellefontaine . Their work was used until the end of 1919 and then abandoned.

Brand Name Economy.For the model of the years from 1916 to 1917 no model name is handed down. A four-cylinder engine powered the vehicles. The chassis had 292 cm wheelbase . The choice was a touring car , touring saloon and a Thre-Dor Roadster . This five-seater roadster had a door on one side of the vehicle and two doors on the other side. The rear allowed access to the rear seats.

Brand Name Economy Vogue .The only model was the 6-46 . The six-cylinder engine was rated at 45.8 hp. The wheelbase corresponded to the previous models. A touring car with five seats, a roadster with four seats, a sedan with five seats and a coupe with three seats were available.

Brand name Vogue. The 6-55 also had a six-cylinder engine, but was stated with 55 hp. The wheelbase was extended to 315 cm. Touring cars and coupe offered space for five people. There was also a limousine with seven seats.

There was no connection to the Economy Motor Car Company , which a few years earlier also manufactured Economy vehicles.