Automotive manufacturer of New York.United States from 1913 to 1915. 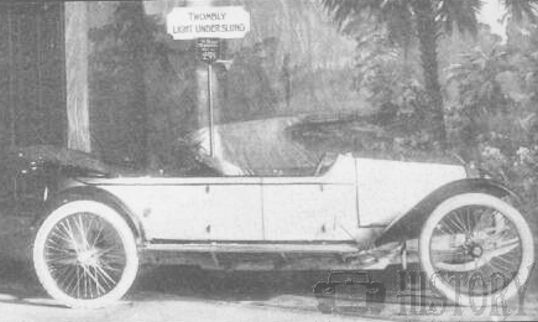 The Twombly Car Corporation was an American automaker in New York City from 1913 to 1915 Cycle Cars  and small cars were sold there under the name Twombly . Founder of the company was Willard I. Twombly , who had twice before tried unsuccessfully to build cars in New York. His companies were closed after less than a year.

First, the cars were built by Driggs-Seabury in Sharon (Pennsylvania) , from 1915 in the company's own factory in New York City. They had water-cooled engines, initially with two, from 1914 with four cylinders. The Twombly was equipped with a Underslung frame and had two seats one behind the other. The 1913 offered two-cylinder model with Reibscheibegetriebe and double chain drive to the rear wheels cost 350 US $. The following year, there was a four-cylinder with a slightly larger wheelbase for the price of 395 US $.

In 1915 Twombly built ordinary cars with four seats. The four-cylinder engine was stronger and there was now a two-seat runabout  A four-seat touring car and a taxi. The company was not successful because the cars sold so badly that the financier, a former pastor named Dr. Ing. Stuart Dodge , without consulting Twombly in February 1915 filed for bankruptcy. Today there are only a few copies of Twombly vehicles left.