Automotive manufacturer of Muscatine , Iowa,United States from 1929 to 1935. 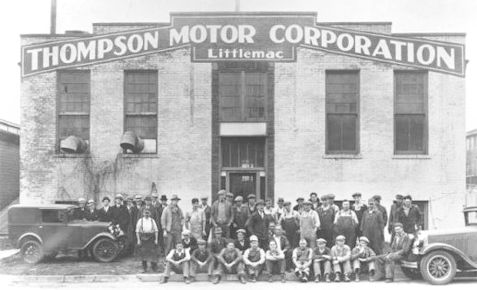 Thompson Motor Corporation was an American manufacturer of automobiles from the late 1920s to the mid 1930s.

The brothers Herbert and Ralph Thompson were lawyers and had political offices. They founded the company in Muscatine , Iowa , in November 1929 . In addition, Harry H. Hoban and Joseph W. Valentine were involved. The designer was Clayton E. Frederickson, who previously headed the Frederickson Patents Company . He produced the first prototype in August 1929 . Later, Oscar P. Eklund was responsible for the design. Only in 1931 was a vehicle on the Chicago Automobile Show . The brand name was Littlemac .

Plans amounted to 100 vehicles annually. In fact, far fewer were created. One source names twelve vehicles for the period from March 31 to August 31, 1931.  On the other hand, the production period from 1930 to 1932 is named.  Two vehicles were exported to Mexico , two others to Egypt . One was sold in February 1934 by  1935 the enterprise was dissolved.

The offer was a small car . A source says that the look of the relatively tall and square body was not as successful as the vehicles of the American Austin Car Company.

The four-cylinder engine came from Star . The chassis had 203 cm wheelbase and 102 mm gauge . The choice was between coupe for $350 and a small vans Truckette for $500.