Automotive manufacturer of St. Louis, Missouri,United States from 1906 to 1909. 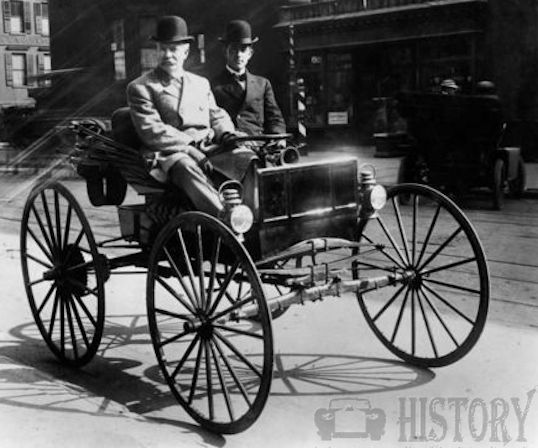 The Success Automobile Manufacturing Company in St. Louis, Missouri, on De-Ballviere Avenue 532 was an American automaker.

The company was founded by John C. Higdon, who had already built a car in 1896, but he did not want to market it and publicly released it for copying.  The first made in 1906 was a high-wheeled runabout with 1575 mm wheelbase, with a retail price of only US $ 250 made the High Wheeler was extremely inexpensive.  For comparison, the Black cost US $ 375 and the Western Gale Model A US $ 500.  The mass-produced Oldsmobile Curved Dash was priced at US $ 650 and Ford's Doctor's Car was priced at US $ 850.

The Model A had an air-cooled single-cylinder gasoline engine installed next to the right-hand seat, steel tires (rubber tires cost a US $ 25, surcharge), two-stage planetary gear and chain drive to the right rear wheel. Speeds from 4 mph (6.5 kmh) to 18 mph (29 kmh) were feasible and gas mileage was 4.25 l / 100 km. Later, other models with wheelbases up to 2,438 mm to, also known as Surrey were offered or in van form.

The low price was not kept; later, more elaborately built highwheelers cost up to US $ 500; the sports model "F" with four-cylinder engine even US $ 800.

Success held various patents on components of its vehicles and then granted licenses to other small automakers. The company sued the Economy Motor Car Company in Fort Wayne and the WH Kiblinger Company (a predecessor of the Auburn Automobile Company in Auburn ), both competitors from Indiana in Highwheeler market, on patent infringement. This was resented by Higdon after his earlier consent to copy parts in the trade press. His Success Automobile Manufacturing Company, however, had to file for bankruptcy in 1909, before it came to a verdict. Until then, the company had built about 600 automobiles.