Automotive manufacturer of Lawrence , Massachusetts.United States from 1899 to 1902. 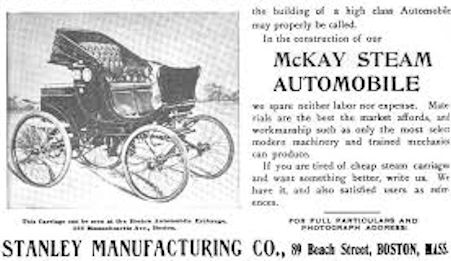 Stanley Manufacturing Company was an American manufacturer of sewing machines and automobiles at the turn of the 19th century .

The company was founded in 1882 in Lawrence , Massachusetts . In 1899 Frank F. Stanley headed the company. They started with the production of automobiles. The license came from the Whitney Motor Wagon Company .

The brand name was initially Stanley-Whitney , but was changed in 1899 toMcKay .  1900, at least one vehicle was presented at the first American Motor Show in Madison Square Garden , New York City . By the end of the year, 25 vehicles were built. At the beginning of 1902 vehicle production ended. Subsequently, sewing machines were created.The offer included steam cars . A steam engine powered the rear axle via a chain. The original price was 1800 US dollars .

The company must not be confused with the Stanley Motor Carriage Company , which also manufactures steam cars.