Automotive manufacturer of Houston , Texas.United States from 1911 to 1912. 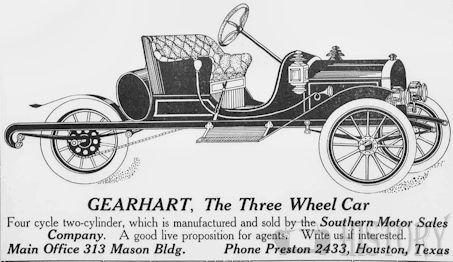 Southern Motor Sales Company was an American company in the automotive industry in the 1910s.

The Houston-based company in Texas drove vehicles from the WH McIntyre Company . Glenn D. Gearhart was general manager. In addition, he manufactured between 1911 and 1912 automobiles that were marketed as Gearhart . The sale was limited to the surrounding area.It is not known when the company was dissolved.

The only model was a small two seat, 3 wheel car with rear single wheel. It had a two - cylinder four-stroke engine
.