Automotive manufacturer of Janesville, Wisconsin United States from 1916 to 1923. 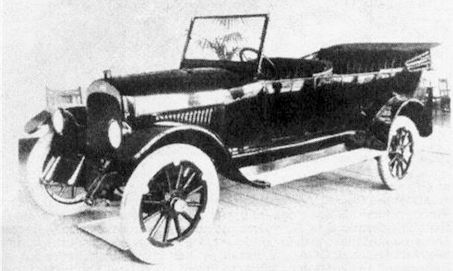 The Samson Iron Works was founded in 1900 in Stockton (California) and renamed in 1916 after successful start of production of farm tractors and smaller engines in Samson Tractor Company . Another name change in Samson Sieve-Grip Tractor Company took place in 1917. In the same year, William C. Durant acquired the company for General Motors , which was looking at this time for opportunities to enter the market for tractors and farm equipment. This was dominated by Fordson with their model F at this time . GM also bought the Janesville Machine Company in 1918 for $ 1 million Janesville (Wisconsin) which specialized in agricultural implement . The following year, the production was merged with Samson and abandoned the plant in Stockton. The result was the Samson Tractor Company Division of General Motors in Janesville.

An additional mainstay for Samson was to offer a range of light trucks with ¾ tons and 1¼ tons of payload offered from 1920 onwards. They were powered by the ohv - four-cylinder engine of the car Chevrolet 490 which made there 2,802 cc (171 ci) 26 bhp (19.4 kW) at 1800 / min. The timing was unhappy. When the Samson truck appeared, the commercial vehicle market was in transition. On the one hand crowds of army trucks that were no longer needed pushed the used car market, on the other hand there was a market concentration in which specialized, partially new companies such as Mack or Whitehad the better cards. Several car manufacturers who had built heavy commercial vehicles alongside such as Packard , Peerless or Locomobile were forced to withdraw from this business because the truck and car business increasingly separated and operated with fleet discounts that small suppliers could not keep up , In addition, Samson competed with the smaller ¾-ton truck, also with a number of car manufacturers who were able, using relevant components from their Personwagen program also can offer such vans priced.

Around the same time as the development of the Samson truck began work on a new car, which should also appear under the Samson brand. The intention of the company was to build the "first and only car designed for farmers". The new model should be called "Whole Family Car" (meaning "car for the whole family"). It was built on a conventional frame with a wheelbase of 118 inches (2,997 mm). The cheap and uncomplicated ohv four-cylinder engine of the Chevrolet FB, which provided 37 bhp (27.6 kW) at 2,000 rpm, was powered by a displacement of 3,671 cc (224 ci). The body was a nine-seater open touringconceived; The rear seat and the emergency seats could be removed and converted the car so the pick up . The plan was to sell 2,250 units in the first year and 5,000 in 1920. However, the management stopped the project shortly before production began when it became apparent that the Model M tug would not be able to meet the high expectations. Thus, the Whole Family Car remained for decades the only model that was announced by GM but not produced.

In 1920, William C. Durant had to leave General Motors for the second time and this time forever. In 1923, the group closed its unprofitable Samson division and handed over the plant in Janesville to Chevrolet. It was used until December 2008 and last produced SUVs for Chevrolet and GMC