Automotive manufacturer of Chicago and Indiana United States from 1902. 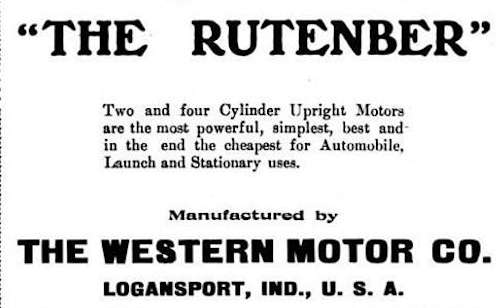 The Rutenber Motor Company was founded as a Rutenber Manufacturing Company in Chicago , Illinois , to build a four-cylinder engine designed by Edwin Rutenber, they also built a car for a short time in 1902 .

Rutenber learned the craft of the mechanic and built about 1892 a single-cylinder engine. In 1898 he produced the first four-cylinder engine in the United States. A single-cylinder engine with 6 bhp (4.4 kW) was installed in 1900 by Frank Eckhart in his automotive prototype, which formed the basis for the car manufacturer Auburn . Auburn continued until about 1923 Rutenber engines.

1902 moved Rutenber his company to Logansport , Indiana and renamed it Western Motor Co. to. There, the company built four- and six-cylinder engines for the developing automotive industry. Rutenber himself also built a car for a short time in 1902 - there were ten copies - but gave it up soon and concentrated on engines. In 1907, Rutenber had 300-400 employees and sold engines throughout the United States.

From 1905, Rutenber engines were installed in automobiles from Stoddard-Dayton , which became famous for their high performance and high speed; a Stoddard-Dayton won the race in Indianapolis in 1909. In 1905, Moon introduced his first car in Detroit with a four-cylinder engine with 35 bhp (26 kW). In 1913, the Moon was equipped with a six-cylinder engine from Rutenber. In 1907, a 60 bhp (44 kW) Rutenber engine powered the Meteor , which traveled from Chicago to St. Louis in 23 hours - a distance of 644 km. Also in many cars of formerly independent US automakers Rutenber engines were used in American,Auburn ,Australian Six,Castle,Clar,Crow-Elkhart,Croxton-Keeton,Glide,Grout,Metz Master Six,Moon Motor Car Company,Jewel,Lexington,Westcott

In 1912 Edwin sold Rutenber the shares in his company and the naming rights. The company was renamed Rutenber Motor Company. Edwin Rutenber then dealt with the manufacture of electrical equipment.

Albert C. Barley , a board member of Rutenber, bought the remains of the Streator Motor Car Company in 1913 and became self-employed. This resulted in a business relationship and Barley was referring to several brands of the new Barley Motor Car Company Rutenber engines.

In 1973, a descendant of Edwin Rutenber of the Smithsonian Institution donated a Rutenber engine.