Automotive manufacturer of Cleveland , Ohio.United States from 1922 to 1924. 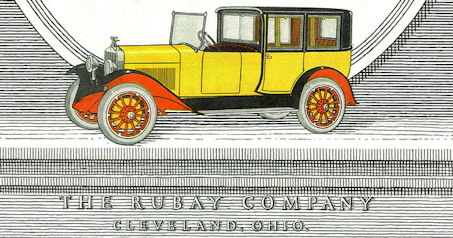 Rubay Company was an American manufacturer of automobiles in the 1920s .

The Frenchman Leon Rubay already produced from 1914 bodies . In 1922 he founded the separate company in Cleveland , Ohio for vehicle production. In December of the same year began the production of automobiles. The brand name was Leon Rubay . In January 1924, the company was sold to the Raulang Body Company .In total, about 12 vehicles were created, one of which still exists.

Paul C. Bastien designed the engine, which Arthur M. Dean revised. It was a four-cylinder engine with OHC valve control , 2043 cc displacement and between 32 and 36 hp . The chassis had 300 cm wheelbase . The saloon , coupé , town car and cabriolet are handed down . Unusually, the four-wheel brakes were. The original price was 5,100 US dollars for the cheapest version.