Automotive manufacturer of Wisconsin.United States from 1948 to 1949. 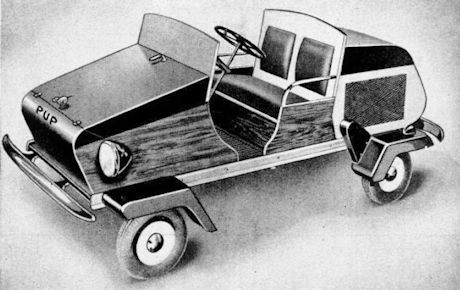 The Pup Motor Car Company was an American automaker, which was based in 1948 and 1949 in Spencer Wisconsin USA .

The 1948 presented Pup was a very simple but unusual, open runabout with two seats, no doors and no roof so weighs just 600 lbs. The chassis was made of oak and had 1829 mm wheelbase. The 2591 mm long construction consisted mostly of plywood. The engine at the rear was a single-cylinder engine built by Briggs & Stratton , which made 7.5 bhp (5.5 kW). with luggage space at the front.

In 1949, this vehicle was replaced by a brand new pup. Although this similar design principles followed, but the wooden frame chassis now had a wheelbase of 1727 mm and the smooth-surfaced construction was 2845 mm long. In contrast to its predecessor, there was a fabric roof and fabric doors. The single-cylinder engine had given way to a two-cylinder in-line engine from the same manufacturer, which brought it to 10 bhp (7.4 kW).