Automotive manufacturer of Illinois.United States from 1905. 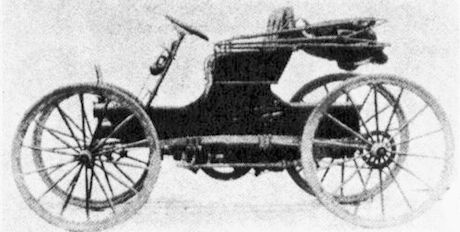 The Practical Automobile Company was a short-lived US manufacturer of Culver automobiles in the early part of the 20th century .

Behind the company who was physician Dr. DD Culver from Aurora Illinois , who had developed a motor vehicle from which he believed that it had eliminated all the shortcomings of the automobile from the perspective of a country doctor. In fact, in 1905 he introduced a " buggy ", consistently designed compact car.

The Culver Buggy was one of the popular highwheelers , a kind of crude vehicle built like a coach, with oversized wooden spoked wheels designed to prevent the floor of the car from landing on swampy ground. At least one copy was built.

The vehicle had a wheelbase of 72 inches (1829 mm). The drive was made by a two-cylinder engine with 6 hp (according to the former calculation method), which was arranged in a conventional manner and transverse to the direction of travel under the seat. The power transmission took place via a chain on the rear axle. The only technical feature was a steering column, which could be folded away to allow entry and exit.

Culver was planning to produce a production in Aurora or Genoa, Illinois, but failed with funding. Already in 1906 he again treated patients in his practice. In the development of Aurora -Automobils the Aurora Motorworks he was involved
.