Automotive manufacturer of Massachusetts United States from 1903 to 1904.

The Pope-Robinson Company was an American automaker, which was located in Hyde Park (Massachusetts) 1903 to 1904 . The company was founded by Colonel Albert A. Pope . Their roots can be traced back to the Bramwell-Robinson Company , a company that initially made paper machines and between 1899 and 1901 also some three-wheeled vehicles with single-cylinder engines. In 1902, their owners split up and each opened his own factory for automobiles. Bramwell founded the Springfield Automobile Company in Springfield, Ohio, until 1905, and Robinson had been producing vehicles under his own name since 1900. TheJ ohn T. Robinson and Company was acquired by Robinson Motor Vehicle Company in 1902 and bought by Pope the same year.

In 1904 the production was stopped and the company sold to Buick . This was a skilful move by the new boss of Buick, William Durant , who was not interested in Pope-Robinson but in his ALAM license.  The Association of Licensed Automobile Manufacturers ( ALAM ) was a powerful association of automakers who wanted to use a universal patent from George Baldwin Selden on the automobile to build a monopoly. Those who wanted to build automobiles without their license had to expect to be sued by the ALAM with often ruinous consequences.

The Pope-Robinson of 1903 and 1904 was a open touring car. He was equipped with a tonneau construction for 5 or 6 people and cost US $ 5000. The front-mounted, water-cooled inline four-cylinder engine produced 24 bhp (17.6 kW). Connected was a three-speed spur gear. The car had a frame of steel rectangular tubes and weighed 1,179 kg. 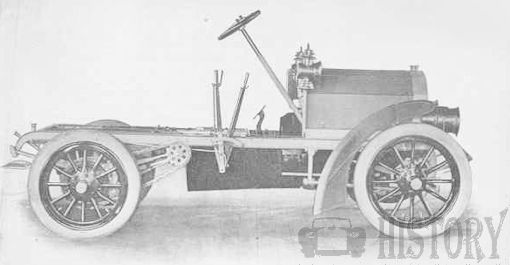