Automotive manufacturer of Buffalo , New York.United States from 1947 to 1951

The Playboy Motor Car Corporation , based in Buffalo  New York  was an American automaker , in 1948 under the brand name Playboy a then unusual, three -seat compact car with retractable metal roof on the market.

Founded first as a 1947 Midget Motor Car Company  at the domicile of 1941 closed body shop Brunn & Company at the Ellicott Street 988 in Buffalo (New York) . President and CEO was Louis Horwitz , as vice president and secretary acted Charles D. Thomas and as CFO Norman Richardson . The share capital of US $ 50,000 came from the private assets of the three partners. Although they had previously dealt with automobiles, but were inexperienced in terms of their production: Horwitz had a Packard Representation and a used car trade and Richardson operate on the premises Brunn a body repair shop and had some gas stations. Thomas was an engineer who previously at Pontiac work and in 1939 a stubborn, very modern prototype was built.Planned was a small car, which should be sold in the US as a second or third car. The goal was ambitious: 100,000 cars should be built annually. The Thomas Special from 1939 .The development of Playboy started according to the manufacturer in 1940, which is probably related to the project mentioned by Charles Thomas of the 1939th His small car designed as a coupe with remarkable foresight actually anticipated many elements of Playboy . The vehicle built in Batavia (New York)  was a bit bizarre and very modern. It was self-supporting, with a pontoon body and had a rear engine , an independent suspension, a padded security interior and a periscope on the roof instead of a rearview mirror.  The prototype of 1946 .The capital of the young company was largely invested in a prototype. Outwardly, he came quite close to the later production car and was well received by the audience at his presentation in the fall of 1946. This took place at the Hotel Statler in Buffalo.  He had a accommodated in the rear, horizontally disposed motor and a three-seater roadster body in fashionable pontoon shape. In addition, another prototype of a two-door station Wagon.For the Playboy A48 The external changes included retouching at the front, a lowered bonnet with the brand logo instead of the "Playboy" lettering and a folding metal roof instead of the fabric hood.The Playboy cost US $ 985 Between 1948 and 1949, only 97 vehicles were manufactured, after the company was forced to close and the production was stopped. 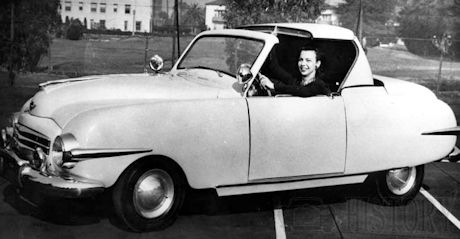 The retractable metal roof was an eye-catcher. It consisted of two parts, to open the front part was folded. The back part was folded backwards. This was designed so that he could be sunk into the hollow behind the seat. Now the front roof part formed the body termination analogous to a tonneau cover . In the open state, the rear seats, which are anyway only suitable for children, were therefore not accessible. Although the roof was balanced with counterweights, it should have been too stiff to be operated from the driver's seat. The closing required anyway a very strong person. A weak point were the numerous rubber springs as a seal; they were prone to leaks. the execution of the Playboy was designed but less expensive. The manufacturer referred to the vehicle itself logically as Combination metal-top convertible coupe which could be used simultaneously as a Business Coupe , Club Coupe or Convertible Coupe . Standard was a manual gearbox from Warner with initially three gears and optional Warner Overdrive.  Playboy used a single-plate dry clutch by Borg & Beck . The vehicle was self-supporting constructed; the frame was welded to the bodywork. It seems that the suspension was largely taken from the prototype. The rear axle ratio was 3.73: 1 at the factory or 4.1: 1 on request . The hydraulic brakes were purchased from Wagner ; the brake drums came from Budd , and the steering came from Ross .Auto-Lite supplied starter, ignition system and the 35-amp generator, AC the gasoline pump. The 80-amp battery from Auto-Lite was housed in the engine compartment. The gas tank in the rear took 10 gallons (just under 38 liters).

The total of the built by the Playboy Motor Cars Corporation around 97 vehicles. . 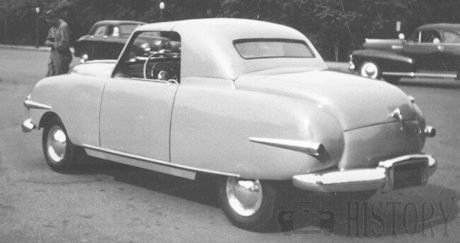