Automotive manufacturer of Racine Wisconsin United States from 1904 to 1911. 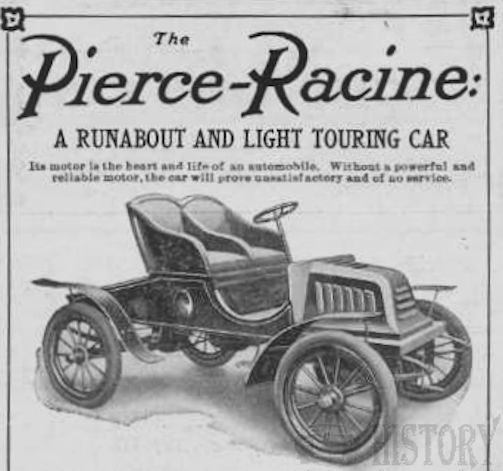 The Pierce Motor Company was an early US automaker, which was based in 1894 in Racine (Wisconsin) . From 1904 to 1911 automobiles were manufactured there under the name Pierce Racine .

The company was founded in 1894 as Pierce Engine Company by Andrew J. Pierce . As early as 1895 there was a first automobile with a single-cylinder engine. In 1899, Andrew Pierce built a second vehicle with a two-cylinder two- stroke engine , the third followed in 1901. 1903 was a small two-seater in series, which was equipped with a single-cylinder four-stroke engine with 8 bhp (5.9 kW) and of the Western Wheel Works only was sold in Racine. The following year Pierce sold the vehicles themselves under the new name Pierce-Racine . In the following years further models emerged, initially with two-cylinder engines, later with four-cylinder engines. The production figures never exceed 200 pieces per year.

In 1909, Pierce renamed his company Pierce Motor Company and sought investors to further expand manufacturing. He found this in some Racine businessmen, who owned a substantial stake in agricultural and construction equipment manufacturer JI Case Threshing Machine Company . Consequently, the CFO of JI Case, Charles McIntosh , became president of the company. In the following year McIntosh died on a trip to Italy. In 1911 JI Case took over the Pierce Motor Company completely and produced the vehicles under its own name. 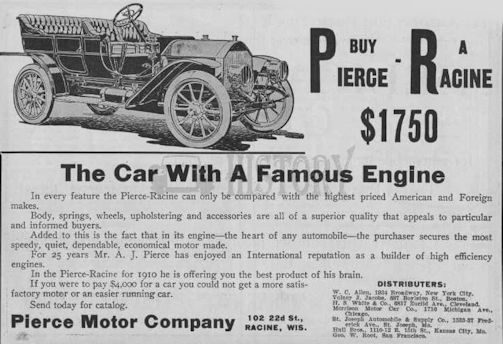