Automotive manufacturer of Bristol , Connecticut.United States from 1909 to 1912. 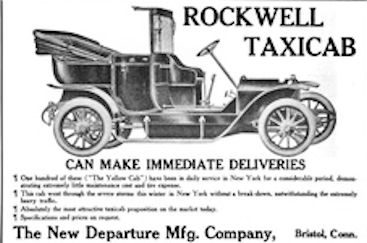 The brothers Albert and Edward Rockwell founded in 1888 the New Departure Bell Company .  The seat was in Bristol , Connecticut . First, they made ball bearing and later other things. At some point, the company name was changed to New Departure Manufacturing Company . In 1898 came brakes for bicycles and 1903 brakes for motorcycles . Brakes have been an important product for the company for a long time.Car production began in 1909.

In April 1910, the Harry S. Houpt Manufacturing Company was acquired and their car production continued. The brand name was Houpt-Rockwell . In the same year this production ended. This resulted in about 100 vehicles. Also in 1910, the Bristol Engineering Company was taken over, the vehicles marketed as Rockwell .

There were mainly taxis and a few cars until 1912 continued while maintaining the brand name. About 200 Rockwell  cars emerged. In 1910, Albert F. Rockwell was president.  He left the company in 1912 with final parts used by Yellow Taxicab Company in New York City in 1912 .

1916 followed the takeover by William Durant . He incorporated the company into United Motors Corporation . Vehicles of the brand Houpt-Rockwell.

The offer of Houpt was taken over unchanged. The choice was a four- and a six-cylinder model . 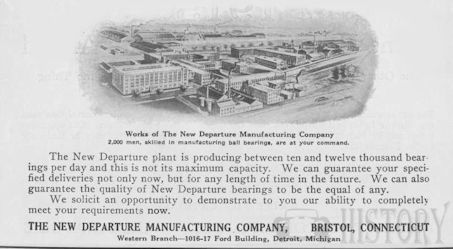