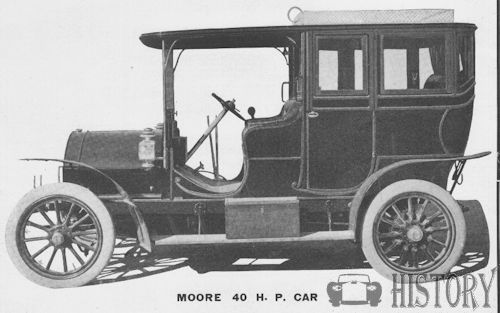 The Moore Automobile Company of 571 5th avenue New York City, was manufacturer of the Moore automobile, known as "The Ball Bearing Car." The company was founded in 1906 and ended production in 1909.

By March 1906, the company was advertising in a national trade magazine as "simplicity in construction and design." They noted that "every revolving shaft on ball bearings." The company was located at 571 Fifth Avenue in New York City.

The Moore was high priced automobile and sold for US$5,000 by 1909. It was advertised as "safe, speedy and reliable." The company only produced one model which came with a 40to 60 horsepower, 4-cylinder, water-cooled engine. It had a 4-speed transmission and was shaft driven and was reported as having "three spark plugs per cylinder."