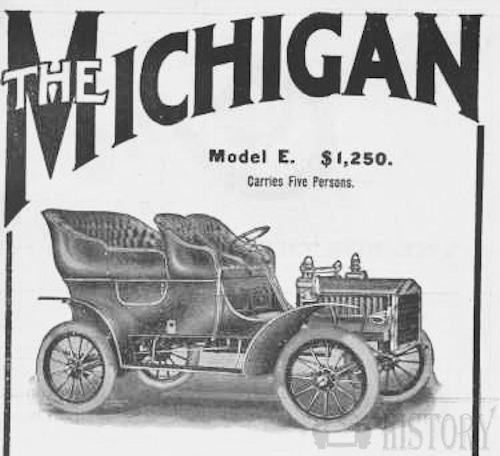 The Michigan was a pioneering brass era automobile built in Kalamazoo, Michigan by the Michigan Automobile Company from 1903 to 1908. It was one of the first vehicles that featured four-wheel-drive propulsion.

The men behind the company were the Fuller brothers, Charles D. and Frank D. They owned the Fuller Brothers Manufacturing Company that made washboards and other wood products. After negotiating with the Blood brothers, owners of the Kalamazoo Cycle Company and builders of the Blood cycle car, on December, 30th, 1902, they established the Michigan Automobile Company with Charles Fuller as chairman, Frank Fuller as secretary and general manager, Maurice E. Blood as treasurer, and Charles C. Blood as superintendent.

The Bloods soon presented a tiny "prototype" car, a two-passenger runabout with a wheebase of just 48 in., a steering lever and an air-cooled, single-cylinder engine that delivered 3.5 hp. For production, it got a longer frame with a wheelbase of 54 in. but was left otherwise quite unchanged. It came with rather large wire wheels and was marketed as the Model A runabout, prized at only $450, and weighing only 360 pounds. As it was a nice and well-built car this was a very attractive offering and one of the cheapest "real" cars at the time. About 100 cars were until 1904. Finally, prices went up to $475. 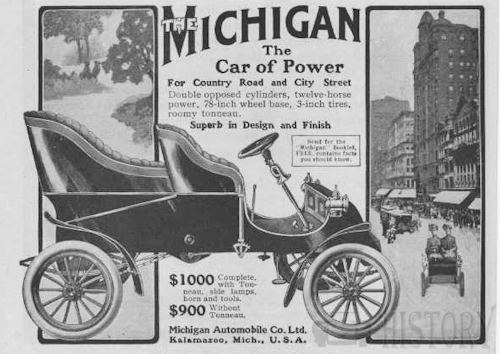 A somewhat larger car, Model C, was added in 1904. It had a 2-cylinder engine that developed 12 hp, a wheelbase of 78 in., a real steering wheel but the engine still placed under the seat. The only available body style was called a Light Touring, a rather fragile affair that looked as if it had a detachable Tonneau. It cost $900.

For 1905 the Model C was continued at the same price. The Bloods designed two more 2-cylinder cars that were additionally introduced in the same year: Model D with the same 12 hp engine, a wheelbase of 80 in. and Demi Tonneau body. It had a price tag of $1,100. For $150 more, a larger Model E was offered. It had an engine with 16 hp, and wheelbase was 90 in. A Side Entrance Tonneau was the only body style available.

The Blood brothers left the company at the end of 1904 in dispute - and set up production of their own car. This Blood was identical with the last car they developed for Michigan. Even model designations and prices were the same.

That confusing situation stayed for 1905, then the Bloods quit building automobiles (for a decade). The Michigan lasted longer; Model E remained available through 1907 as the only offering, with a raise of price to $1500 for 1906.

The Reynolds-Alberta Museum has a four-wheel drive Michigan car from about 1905 in unrestored storage. 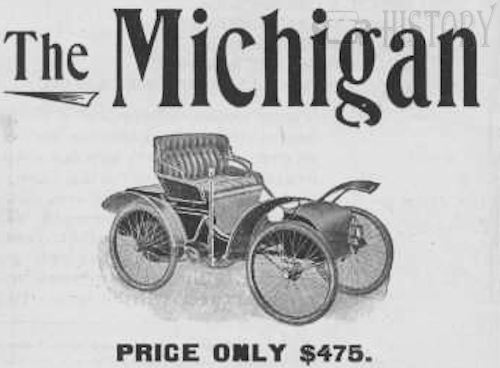