The Metz Company was a pioneer brass era automobile maker established by Charles Herman Metz in Waltham, Massachusetts, from ca.1908 to 1922. 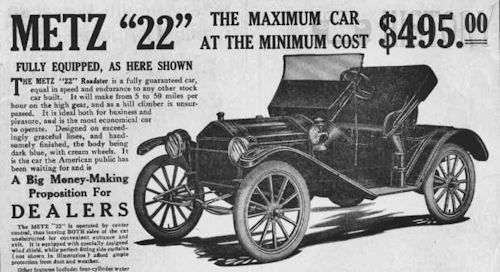 Claiming to be "winner of the Glidden Tour", the 1914 Model 22 was a two-seat roadster or torpedo. It had a 22½ hp (17 kW) four-cylinder water-cooled engine with Bosch magneto, full-elliptic springs front and rear. It ran on artillery wheels with Goodrich clincher tires, and featured a Prest-O-Lite-type acetylene generator for the headlights. It was billed as "gearless", having a friction drive mechanism, and priced at $475; by contrast, the Success was an uncommonly low US$250, the Black started at $375, the Brush Runabout was US$485 Western's Gale Model A was US$500, and even the high-volume Oldsmobile Runabout ten years earlier was US$650.

The  model 25 was a larger Four-seat Touring body  with a 105" wheelbase with 32" wheels. and Goodrich clincher tires for around $600 .Features electric start and headlights.

Although Metz was not the first to offer a kit car (Dyke and Sears predated Metz with do-it-your-self high-wheelers), Metz did offer the first known kit automobile on the installment plan, known as the Metz Plan. The buyer would buy 14 groups or packages of parts for $27.00 which would be put together with the plans and tools supplied, or a factory-assembled automobile could be bought for $600.00. This plan was in effect until 1911 when it became impractical to compete with a dealer-supplied model "T" Ford.

By 1922, the company was in dire financial condition and was taken over by the Waltham National Bank. They reorganized the company and renamed it the Motor Manufacturers Incorporated of Waltham. This successor company produced an Automobile called the Waltham Six, which sold for $2,450.00 and was produced in 1922 only. This last desperate attempt to save the Metz Co. failed. Charles Metz filed for Bankruptcy in August 1922.