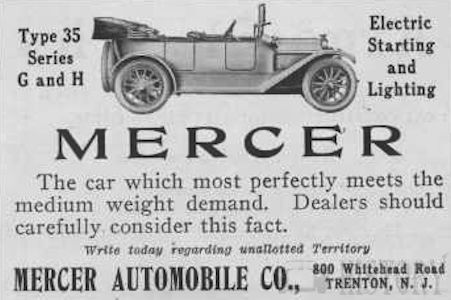 Mercer was an American automobile manufacturer from 1909 until 1930. It was notable for its high-performance cars, especially the Type 35 Raceabout.

Mercer incorporated various talents and funders: Ferdinand Roebling, son of John A. Roebling , was president of the company and his nephew Washington Roebling II the executive director. The Roebling family worked with great success on the production of steel cables and suspension bridges; they were used to working in engineering. The CFO was John L. Kuser, who, along with his brothers Frederick and Anthony, had amassed a considerable fortune in banking, brewing and bottling.

Washington Roebling was a friend of William Walter , who had produced a small number of luxury automobiles in New York City . The Kuser family owned a vacant brewery in Hamilton, New Jersey, where Walter and his factory ceased in 1906. Walter, however, had accumulated so much debt in 1909 that the Roebling and Kuser families paid him off before he had to file for bankruptcy. The name of the company they changed to Mercer, named after the site Mercer County in New Jersey . The company name was 1910 Mercer Autocar Company and the seat was in Trenton , New Jersey. In the same year, the name was renamed Mercer Automobile Company .  Talented engineers and racers brought new success, and the company focused on demonstrating their performance in automotive competitions .

In October 1919, after the death of the last Roebling brother (Washington Roebling II died in the Titanic sinking in 1912 ), a company from Wall Street bought the company and placed Packard's former vice president , Emlen Hare , at the helm who brought Mercer under the roof of Hare's Motors. The new company name was Mercer Motors Company .  Hare wanted to expand, expanded its model range and production and also bought the brands Locomobile and Crane-Simplex to. Over the next few years, Hare's Motors had to go through these acquisitions and the recessionpay a bitter price: Locomobile was liquidated and bought by Durant Motors in 1922, and Mercer set up its last cars in 1925; In total there were about 5000 pieces.

The Elcar Motor Company tried to revive the brand name. On 21 November 1929, the new name was Mercer Motors Corporation . The seat was in Elkhart , Indiana . Two vehicles were presented at the New York Automobile Show .. In 1931 the company was dissolved.

In October, 1919, after the last involved Roebling brother died (Washington A. Roebling II perished in the 1912 Titanic disaster), the company was obtained by a Wall Street firm that placed ex-Packard vice-president Emlem Hare in charge, organizing Mercer under the Hare's Motors corporate banner. Hare looked to expand, increasing Mercer's models and production, and also purchasing the Locomobile & Crane-Simplex marques. Within a few years, the cost of these acquisitions and the economic recession took a financial toll on Hare's Motors. Locomobile was liquidated and purchased by Durant Motors in 1922, and Mercer produced its last vehicles in 1925, after some 5,000 had been built.An independent effort to revive the marque in 1931 resulted in only 3 vehicles being constructed and displayed.The company is currently owned by Fred Hoch of Schaeffer & Long.