Marathon Motor Works was an early automobile manufacturer based in 1200–1310 and 1305 Clinton St., Nashville, Tennessee. It grew out of an earlier company called Southern Engine and Boiler Works founded in 1889 which made industrial engines and boilers in Jackson, Tennessee.

As such, the firm had metal-working and power plant experience which could easily be transferred into the then-new and rapidly expanding automobile industry. It turned its attention in this direction shortly after the turn of the twentieth century. From 1907 to 1914, the company manufactured the Marathon automobile.

Then as now it was common for auto manufacturers to outsource some of their components, concentrating on assembly and marketing, and perhaps manufacture of a few major systems. Southern Engine took a different approach however, and rather audaciously decided to engineer and build every single part of its car in-house. The company was fortunate to possess an exceptionally talented young engineer, William Henry Collier, who accepted the challenge, and by 1906 had a prototype ready for inspection. It was not ready for much else, though. The company's newsletter daily remarked that the car "should move, but don't".

Rapid progress was made after that, though, and small production runs were achieved in 1907 and 1908. Outside investors were invited in the latter year,

Bodies styles were standard Roadster and Torpedo Roadster ,and larger Standard touring car, 4 passenger Touring plus a 4 door and Torpedo touring .they sold from $1500.to $1700  Sales volume reached about 400 units, a respectable figure at the time, especially considering the firm was making virtually all the parts itself. 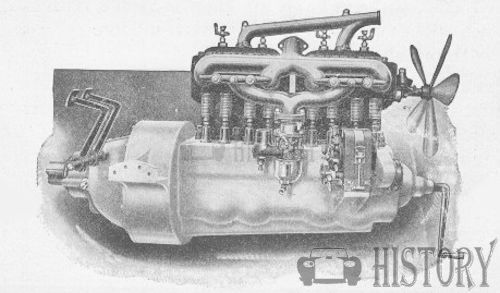 Powered by a 4 cylinder water cooled engine with 35 HP single camshaft and offset crankshaft. with the valves outside the crankshaft for easy maintenance.

wheelbase from 116 inches to 120 inches for the Touring.

Tires 34 inches height by 3 1/2 inches width on base model ,with 35 inches by  4 inches on the Torpedo Touring.

Lighting came by 2 Gas headlamps with oil filled side and tail lamps.on the base models,with electric front and rear light on the more expensive Touring.

Equipment included a Jack, tire repair kit including a pump and tools to repair. 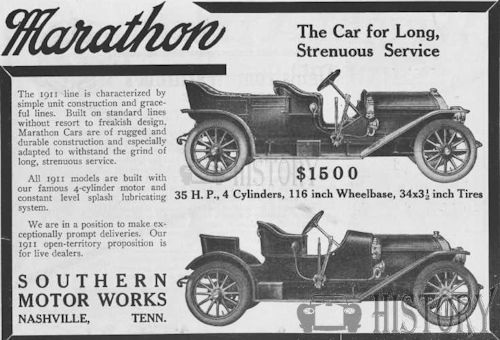 The vehicles had been marketed as Southerns at first, but another firm was using that name. A decision was made to rebadge the automaking operation and spin it off as a separate company at the same time. In 1910, Marathon Motor Works was created, named out of the enthusiasm for things Greek which had grown out of the 1904 Olympics. Concurrently, the company moved its operations to a larger facility in Nashville, Tennessee, whose finance and transport infrastructure could better support a growing company.

And grow it did. Marathon was soon on a genuine roll, even by the exuberant standards of the exploding auto industry. The cars acquired a good reputation for quality and durability, probably helped by the fact that the factory had total control of its parts, engineering and manufacturing. New models and national advertising followed, and production soared to 10,000 units in 1912. Dealers were signed up literally on every continent and demand considerably exceeded supply.

As with so many of the early auto firms, though, management and finance did not keep up with engineering. It was said that Collier was allowed to make fewer and fewer decisions, having to defer instead to a board of directors that often changed and may have been involved in financial improprieties. Critical personnel began to leave and suppliers began to complain of non-payment. The company fell as fast as it had risen and 1914 was its last year. The tooling was bought by some former staffers with backing from an Indianapolis group. The Herff-Brooks Corporation briefly continued to produce the cars in that city. 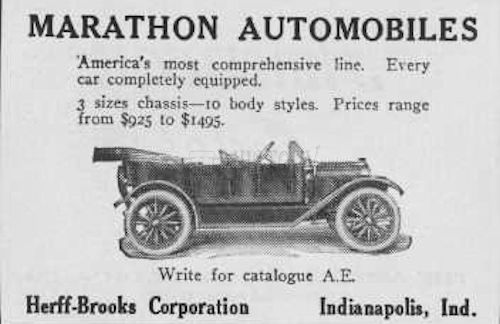 The Marathon is remembered locally as being the only brand of car ever actually built in Nashville. (The present-day Nissan and GM facilities in the area are outside the city.) The former Marathon plant still exists and is currently home to several artistic businesses.

Marathon cars are collectible today like other Brass Era cars, although only nine are known to have survived. Four of these are currently in the possession of the owners of the former Marathon Building.

Recent reports have shown that the car which is in the best condition is in Argentina. This unique car is in perfect running condition and it is owned by an Argentinian collector who has worked for two years in order to restore it. This collector has managed to maintain all its original parts as if it were just released for sale.

In 2008, a mystery novel called The Marathon Murders was published by Nashville author Chester Campbell. Although the murder itself is fictional, the book uses the documented disagreements and possible dishonesty among the board and executives to provide a plausible motive. 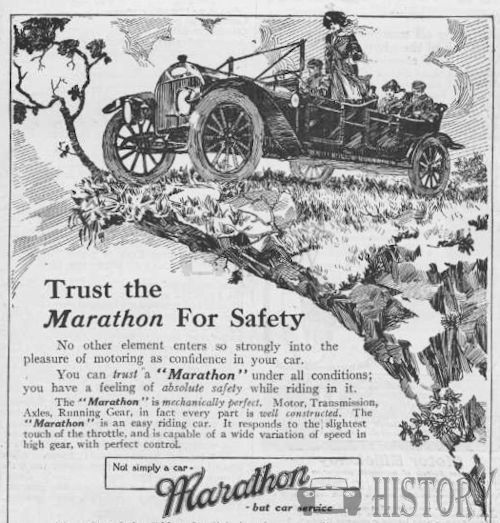