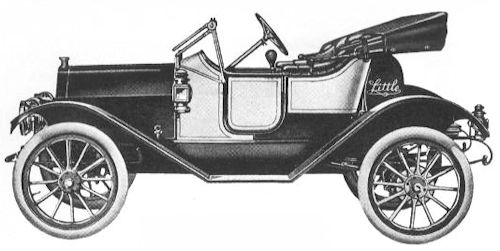 The Little was two automobiles built in Flint, Michigan, from 1912 to 1913 and the company, Little Motor Car Company, founded by William H. Little and William C. Durant that built them. It was incorporated into the current Chevrolet Motor Company.

Little Motor Car Company was an automobile manufactured founded primarily by William H. Little and William C. Durant that operated from 1911 to 1913.

After the Panic of 1910–11 and lack of cash from overexpansion that led to General Motors's Board to oust Durant, Durant began forming other car companies including Chevrolet and Mason Motors. Durant purchased the failing Flint Wagon Works and used the assets to set up the Little Motor Car Company and Mason. The Little Motor Car Company was incorporated on October 19, 1911, by Charles Begole, William Ballenger, William H. Little, and Durant. A.B.C. Hardy was appointed to manage the Little plant. The Little company was charged with building a small car to fill the void left by Buick Motor's discontinuing the Model 10 and compete with the Ford Motor Company.

The first Little was a four-cylinder released in 1911, and was considered a better auto than Chevrolet. Durant ordered another model, the Little Six, to be produced by the company. The company purchased engines from Sterling, another Durant company.

In 1912, Durant set up Republic Motors to distribute and market both Little and Chevrolet autos. To help Republic, Durant had Littles rebadged as Chevrolets, which increased sales for the vehicle.[In July 1912, Republic was incorporated and became the holding corporation for Little, Chevrolet, and Mason companies.

Little also worked at Chevrolet and recommended that Chevrolet construction be moved to Flint to solve pricing issues with the first Chevrolet and keep quality high. The Little plant thus started to build Chevrolets in 1913. However, this made the Little somewhat a duplicate of Chevrolet with the less-marketable name. Chevrolet bought the Little Company at the end of 1913.

In 1914, a 3.6-L six-cylinder L-head engine was available in a later model that had a larger chassis. This was phased out in 1915, as it was too close in size and price to the Chevrolet Six.

Engines for the two automobiles were built by Sterling Motor Company, a Durant-owned company.

William H. "Big Bill" Little was an early automotive manager and namesake of the company and automobiles. He was born in 1876 in Westboro, Massachusetts. Before 1906, he was a manager at Locomobile Company of America in Bridgeport, Connecticut. Little moved to Flint, Michigan, in 1906 to become general manager and plant supervisor for Buick Motor Company under David Dunbar Buick.

With Durant's ousting in 1911, Little joined Durant in his new auto businesses, Chevrolet Motor Company and Little Motor Car Company. Little was an incorporator of both companies and was appointed president of Chevrolet. Later, Little managed Sterling Motor Company, another Durant-owned company, and Scripps-Booth, a major Sterling customer.