Automotive manufacturer of Chicago.United States from 1912 to 1913 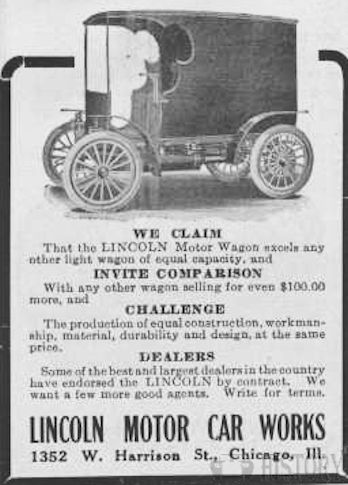 The Chicago-based company in Illinois had already made some automotive parts for Sears . When Sears discontinued its automotive business, Lincoln Motor Car Works continued production for its own account. The brand name was Lincoln  began in 1912. By 1913 ended production with cars and commercial vehicles built.

The Model 24 was a highwheeler . An air-cooled two-cylinder engine with L-head drive via a friction and two chains to the rear axle. The engine had 104.775 mm bore , 101.6 mm Stroke 1752 cc capacity and 14 PS output. The chassis had 183 cm wheelbase . Steered was with a steering lever from the left seat. The original price was 585 US dollars .

There was also the Light . This was more modern and lower designed. Engine and wheelbase corresponded to the other model. The construction was a touring car . The car cost $ 650.

In the interest of simplicity, all models used a friction-drive transmission. A roller (a metal wheel with a rubber surface vulcanized to increase its grip) on the front sprocket shaft was pressed against the machined rear surface of the engine flywheel, thus driving the sprocket shaft, the drive chains and the rear wheels. Moving the shift lever set the drive roller to various positions on the flywheel, either nearer the center or nearer the edge, effectively changing the "gear ratio" for climbing hills or driving on level roads. Moving the roller past the center point spun it backwards to give reverse gear. The front sprocket drive shaft was free to slide forward and backwards slightly, just enough to allow the roller to move away from the flywheel. The "clutch pedal" worked differently from most other cars, in that the operator had to hold their foot on the pedal to keep the roller pressed against the flywheel (the catalog claimed that the weight of the operators foot was sufficient to provide forward motion). Removing the foot from the pedal allowed the roller to spring back from the flywheel, effectively providing "neutral" so the car could be cranked without moving forwards.

The engine was lubricated by an "oiler", essentially a tank mounted under the seat which had several adjustable drip feeds with separate lines to the engine bearings and other areas. All components of the transmission were exposed, so several bearings and pivots had to be oiled or greased manually from time to time.

A form of differential action was obtained by building each front drive sprocket with a two-way clutch. These clutches engaged when the shaft upon which they were mounted turned in either direction, but disengaged when the wheel turned them faster than the shaft. When driven in a straight line, both clutches would engage, and provide power to both rear wheels. When the car went around a corner, the outside wheel turned slightly faster than the inside wheel, disengaging the sprocket for the outside wheel, and propelling the car with the inside wheel only. On slippery roads, such as in deep mud, snow, or sand, if one wheel lost traction the other wheel would continue to pull, allowing the car the continue moving until either both wheels found traction once more, or both wheels lost traction completely. Because the cars were very light weight, they were capable of being driven through mud or snow which would immobilize heavier cars with conventional differentials.

The company is not related to the current luxury car brand owned by Ford Motor Company, which was founded by Henry M. Leland in 1917, two years after Sears stopped selling cars.