Automotive manufacturer of Connersville, Indiana.United States from 1910 to 1927. 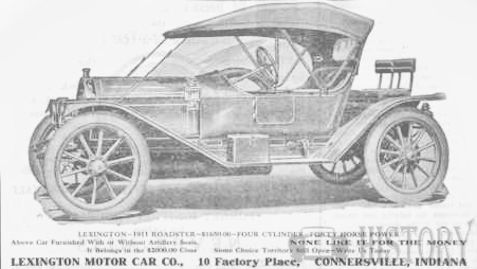 The Lexington was an automobile manufactured in Connersville, Indiana, from 1910 to 1927. From the beginning, Lexingtons, like most other Indiana-built automobiles, were assembled cars, built with components from many different suppliers.

In 1910, a group of Connersville businessmen noted the community had too much tied up in the buggy and carriage industry, which was being displaced by the growing use of the automobile. The group enticed the infant Lexington Motor Car Company to relocate from Lexington to a new plant at 800 West 18th Street in the McFarlan industrial park, with headquarters at 1950 Columbia Avenue. John C. Moore, the company's chief engineer, immediately started on improvements to the Lexington to keep the company ahead of its competition. His 1911 multiple exhaust was reported to give 30 percent more power on less fuel. Each cylinder had a separate exhaust. Dual exhaust pipes and mufflers were used.

The company entered both the Glidden Tour and Indianapolis 500 in 1912.

Financial difficulties were solved in 1913 when E.W. Ansted acquired Lexington to assemble the six-cylinder Howard for a contract with a Chicago distributor. The resultant company was named Lexington-Howard. In 1915, the name changed back to Lexington Motor Company. The regular four-cylinder engine was supplemented by a light six and a supreme six. With the new Ansted engines, its cars became modern and powerful. In 1916, Lexington was using the Continental engine.

Lexington's first plant expansion was in 1915. A factory building was erected just north of the office. Also built at the same time was a 100-foot (30 m) smokestack with the Lexington name in lighter color bricks. Four years later the company built a 106,050 sq ft (9,852 m2) assembly building just west of the office.

In 1917, Moore put together a new frame with a rigid box cross-section that eliminated the problem of jammed doors caused by frame flexing. This car also had an emergency brake affixed to the drive shaft. In 1918, Lexington autos featured hardtop enclosures made by the Rex Manufacturing Company, also of Connersville.

Two short-wheelbase race cars with the powerful Ansted engine were built by Lexington for the 1920 Pikes Peak hill climb. The cars placed first and second in their initial outing and brought home the Penrose trophy. Again in 1924, Otto Loesche won, with an 18-minute 15 second dash and brought the trophy home for keeps. The Penrose trophy is on display at the Fayette County Historical Museum on Vine Street, Connersville Indiana.

The formation of the United States Automotive Corporation was announced by President Frank B. Ansted at the New York Auto Show on January 12, 1920. It was a $10 million merger with the Lexington, the Ansted Engineering Company, and Connersville Foundry Corporation, all from Connersville, plus the Teetor-Harley Motor Corporation of Hagerstown. 1920 marked the high point of Lexington production with over 6,000 built.

On December 16, 1921, William C. Durant, founder of General Motors and former GM president, ordered 30,000 Ansted engines for his new Durant Six, being built in Muncie, Indiana, by Durant Motors, Inc. Late in 1921, Alanson P. Brush (designer of the Brush Runabout and consulting engineer to General Motors) sued the company, alleging the Ansted engine infringed a number of his patents. The negative publicity hurt.

The post-World War I recession of the early twenties destroyed many American automobile manufacturers. Lexington Motor Car Company and United States Automotive Corporation were affected by these recessionary events. Production in 1922 plummeted to roughly a third of that of 1920. In 1923, Ansted Engine Company entered receivership, with Durant as a principal shareholder. Lexington also entered receivership in 1923. In 1926 and 1927, respectively, E.L. Cord's Auburn Automobile Company purchased Ansted Engine and the Lexington Motor Car Company. The Lexington was soon phased out.

Cord then invested $2 million in plant and production facilities. The new manufacturing plant was comparable to the most modern assembly plants anywhere in the world. It consisted of 20 buildings on 82 acres (330,000 m2), and 1,500,000 square feet (140,000 m2) of manufacturing area available for the production of 400 bodies and 250 completed cars per day. Sheet metal, wood, engines and other materials entered the plant on the northeast side, and the completed car was delivered to the customer near the southwest corner.

For 1919, there were new, enclosed bodies with names like Coupelet, Sedanette, and Salon Sedan all with six-cylinder engines and a 122 in (3099 mm) wheelbase.