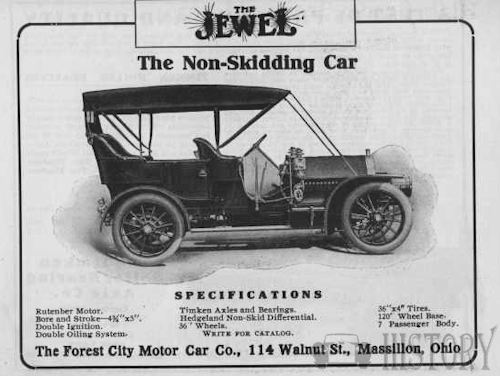 The Jewel Motor Car Company of Massillon, Ohio (formerly the Forest City Motor Company) manufactured the Jewel automobile from 1906 to 1909.

The Forest City Motor Company was founded in Cleveland, Ohio, in 1905 and by the end of the year, the company had relocated to 114 Walnut Street in Massillon and had shortened the name of their automobile from Jewell to Jewel. During 1909, the name of the firm was changed to the Jewel Motor Car Company.

The Jewell Model B, a gasoline powered Runabout, was advertised in a national trade magazine in March 1906, as a "perfect" car for US$400. The automobile had 28-inch (710 mm) rubber wheels standard and optional pneumatic tires could be installed for an extra US$50. For another US$25, a top and side curtains were added. The first Jewell automobile was produced with a 8-horsepower and had a 2 cycle, single-cylinder, water-cooled engine. Transmission was a single planetary type with triple positive clutch.

In 1907, the Model D was sold for US$600. It was equipped with exterior a single-cylinder, two-cycle engine with 8-horsepower. The transmission had two speeds, forward and reverse. The car also came with lamps and a storm front and tools.

The Jewel 40 was introduced in 1908. It was powered by a 4-cylinder Rutenber engine manufactured by the Rutenber Manufacturing Company. The automobile could be purchased as a Roadster or seven passenger Touring Car. Both had 120-inch (3,000 mm) wheelbase and 36-inch (910 mm) wheels and tires. The car sold for US$3,000.

The company produced approximately 1,000 automobiles before ending production in 1909. 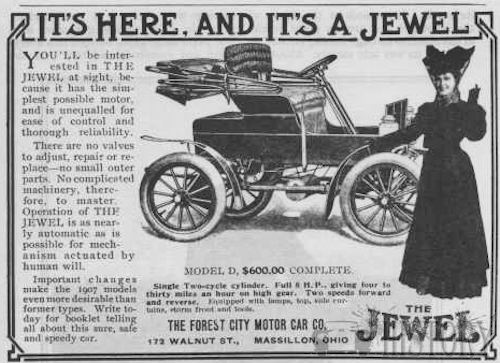