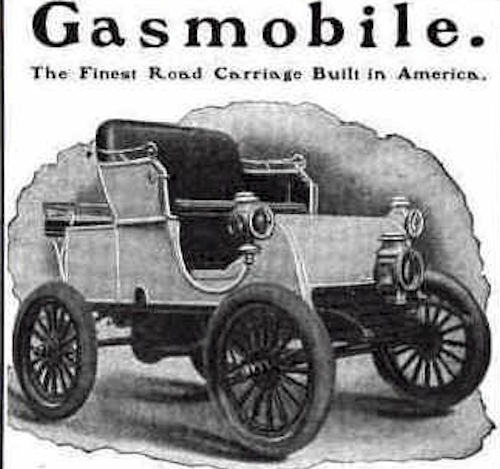 The Gasmobile, originally called the American, was an automobile first produced in 1899. The name was changed to Gasmobile in 1900 by president John H. Flager.It appeared at the New York Auto Show in 1900.

By 1901, 140 cars were made. One of its distinctive features was an automatic starting device. After producing a six-cylinder car, the company folded in 1902.

The first models had a single-cylinder engine with 3  hp . He was mounted under the seat and drove over a chain to the rear axle. Runabout and Phaeton are handed down initially , from 1900 Phaeton, Speedster , Surrey and a van .

Also in 1902 there were two larger models with 225 cm wheelbase. The Model 4-C had a four-cylinder - front engine with 20 hp and was a touring car karosseriert. The 35 HP had a six-cylinder engine with 35 hp. It was commissioned by C.V. Brokaw and was presented in January 1902 at the New York Automobile Show . That was probably the first sold six-cylinder vehicle of a US manufacturer.