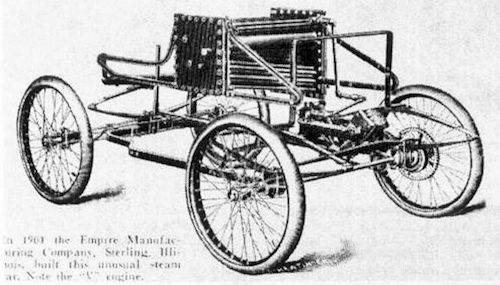 The Empire was an American automobile manufactured from 1901 until 1902. A product of Sterling, Illinois, it featured a vee-twin Steam engine geared to its right-hand rear wheel. It had a rectangular, transverse mounted boiler with horizontal tubes across the chassis. Coachwork was of the motor buggy style.

Built by the Empire Manufacturing Co. (soon to be renamed the Empire Automobile Co.) in Sterling, Illinois, it was offered for only $ 750; the popular Oldsmobile Curved Dash cost $ 650.

The essentially same car was built 1901-1902 by the Sterling Automobile & Engine Co.

When this company failed to pay their factory mortgage the company was sold by the sheriff's office for $ 1300 and manufacture halted.

The only model was a steam car . A V2 - steam engine drove the rear axle. The open body could accommodate two people. The illustration shows a runabout . The wheels were wire spoke wheels. The original price was 750 US dollars .

There was no connection to William T. Terwilliger & Company and Empire Automobile Company , which also marketed vehicles as Empire .