American Automotive manufacturer USA From 1956 to 1958 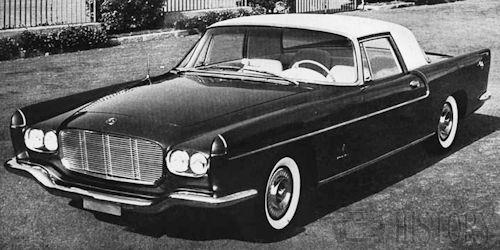 Dual-Ghia is a rare, short-lived, automobile make, produced in the United States between 1956 and 1958. The idea for Dual-Ghia came from Eugene Casaroll, who formed Dual Motors in Detroit, Michigan to build an exclusive car at a moderate price.

The design was based on 4 1954 and 1955 Chrysler concept cars, named the Firearrow II, III, and IV and the Firebomb, which had all been designed by Virgil Exner. The Dual-Ghia car was designed by Chrysler. The design was fairly conservative with single headlamps and slab-sided features, small conservative fins and no styling gimmicks. A four-place convertible was the only offering.

A Dodge frame and drive-train was transported to Italy, where the bodywork and interior was fabricated by the Italian Coachbuilder Ghia. Performance was excellent, due to the cars being powered by the small 315 cu in (5.2 L) Dodge hemispherical-head short-stroke V-8 engine.

With a retail price close to $7500, the Dual-Ghia was about $200 more expensive than the next most expensive American car, the late 1950s Cadillac Eldorado Biarritz convertible. Out of the 117 cars produced, 32 still existed as of July 2006.

The cars were mostly bought by American celebrities, such as Frank Sinatra, Sterling Hayden, and Richard Nixon. Desi Arnaz owned one, but he wrecked it. Ronald Reagan owned one, which he lost in a high-stakes poker game with then-President Lyndon Johnson, who kept the car for several years. Dean Martin had one at one point as well, according to his son Ricci. Dean Martin can be seen driving his Dual-Ghia in the film Kiss Me, Stupid.