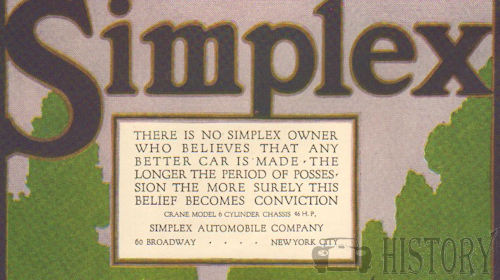 Crane-Simplex was a car manufacturer, operating in New York City and New Brunswick, New Jersey, at the beginning of the 20th century.

The Smith and Mabley Manufacturing Co. of New York City was founded by Carleton Raymond Mabley (1878-1963) and his brother-in-law Albert Proctor Smith to import European cars for sale in America. They built their first car in 1904, which was called the S&M Simplex, largely from imported Mercedes parts. The company went bankrupt in 1906 and in 1907 the firm's assets were absorbed into the Simplex Automobile Co. Herman Broesel, passionate about racing, purchased the company and redesigned the "Simplex" so it could reach speeds of 90 mph (140 km/h). The firm became Crane-Simplex after purchase of the Crane Motor Car Company of Bayonne, New Jersey, which had been founded by Henry Middleton Crane, in 1915. The Crane-Simplex Company was purchased in 1920 by the Mercer Automobile Company but by 1922 ownership had passed to Henry Crane, who then failed to realise an ambition to revive the marque.

The 1904 Smith and Mabley was a touring car model. Equipped with a tonneau, it could seat 5 passengers and sold for US$5500. The vertically mounted water-cooled straight-4, at the front of the car, produced 18 hp (13.4 kW). A 4-speed transmission was fitted. The wood and angle iron-framed car weighed 1200 lb (544 kg). The car used a honeycomb radiator with a fan.

The Crane-Simplex, built in New York, was among the most expensive, largest, most powerful, and well-built luxury cars of the early twentieth century. They were owned by only the wealthiest socialites and entrepreneurs of the time and built by the best coachbuilders in the U.S. Only 121 examples were made. 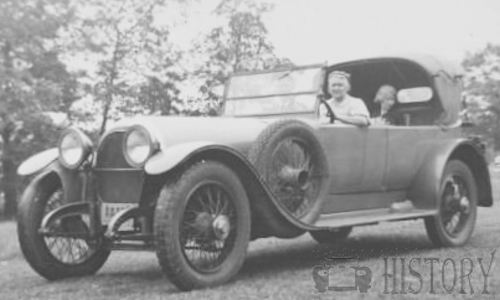