Automotive manufacturer of Sebring , Florida.United States from 1974 to 1978. 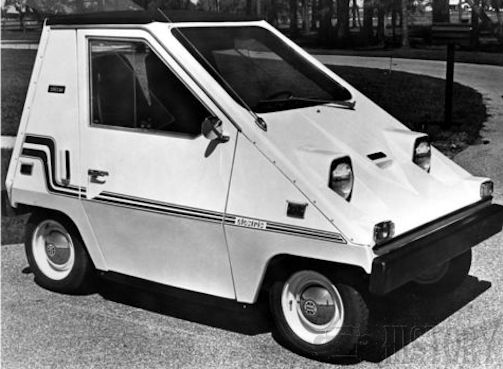 Sebring-Vanguard Inc. was an American manufacturer of small automobiles in the 1970s .

The company was founded in 1974 in Sebring , Florida . The production of automobiles began. The brand name was Sebring-Vanguard . 1978 ended production.

In 1974, 608 vehicles were created. In 1975, with 1,193  For 1976 424 vehicles Figures for 1977 and 1978 are unknown. Commuter Vehicles continued production under its own name.The offer included the electric car Citicar . An electric motor powered the vehicles. The variant as a commercial vehicle was called Citivan .

Sebring-Vanguard Citicar was a car model of the US Sebring Vanguard from Sebring (Florida) . Construction was 1974 to 1977. The vehicle and its variants were until the success of the Tesla Roadster 2011, the best-selling electric cars in the US. Sebring-Vanguard was the Commuter Vehicles, Inc. This company produced similar vehicles (the Comuta Car and the Comuta Van ) from 1979 to 1982.

The Citicar was a small electric vehicle, which was manufactured in 1974 by Sebring-Vanguard under the impact of the oil crisis of 1973. It was a golf cart-like vehicle that reached a top speed of 63 km / h. The early models did not have any special features like lockable doors or air conditioning. In 1976, so many Citicars were manufactured that Sebring-Vanguard became the sixth-largest US automaker after GM , Ford , Chrysler , AMC and Checker . The production ran until 1977; a total of 2300 Citicars were created.

The Commuter Vehicles, Inc. bought the plans of citicar and renamed the vehicle in comuta car around. 1979 began the production of an improved version and it again emerged about 2000 Comuta cars and Comuta vans. With a total of 4444 produced "C-cars" this model held the record of the best-selling street-legal electric car in automotive history until the since 2012 built Tesla Model S.

From the Citicar there were three models. The first made coupe was the smallest. It had a smooth, sloping front, a flat roof, and a smooth, almost vertical stern. Early models were powered by a 1.8 kW electric motor and fitted with a 36V battery pack. From December 1974, a 2.6 kW engine and a 48 V battery pack were installed. From March 1975 there were many small improvements.

The later Comuta Car models were powered by a 4.4 kW engine and the batteries were relocated from their place under the seats to the bumpers, which made the car about 400 mm longer than the 2438 mm long Citicar.

The largest models was called Citivan or later Comuta Van. The vehicle length grew to 3607 mm; It was powered by a 8.8 kW engine and had a 72 V battery pack and a three-speed gearbox. Like the other models, it offered two seats, but also had a hold. It was the only model with trunk and sliding doors. Many Comuta van were right-hand drive and were delivered to the US Mail .

All models had a welded aluminum tubular frame, a body made of ABS , rigid axles and leaf springs front and rear. The top speeds varied between 48 km / h and 80 km / h, the range was up to 64 km. 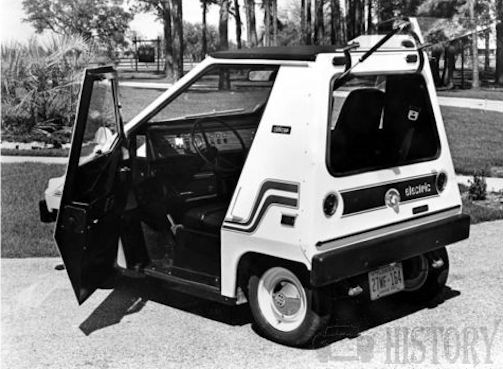