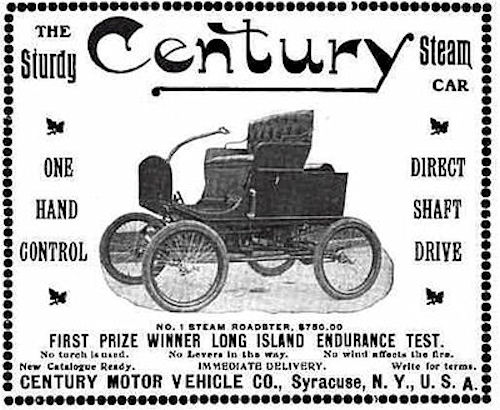 Century Motor Vehicle Company (1899–1903) was a manufacturer of electric and steam automobiles in Syracuse, New York. The company switched to gasoline-fuelled internal combustion engine-powered automobiles in January 1903, and went out of business later that year.

Century Motor Vehicle Company was founded in Syracuse, New York in 1899. At the very start of the automobile industry's history, a group connected with the Barnes Cycle Company, including bicycle racer and designer, William Van Wagoner from New Jersey, began to tinker with automobiles, as did all other bicycle producers of the day. Van Wagoner and partner Charles F. Saul had a prototype ready by 1899 which was named the Van Wagoner. Founders of the company were Saul, Van Wagoner, Charles Listman, Charles A. Bridgman and Hiram W. Plumb.

Barnes Bicycle Co., whose White Flier sold for $125 or more, was absorbed by the American Bicycle Company in 1900. The next year, the group from Barnes produced a few runabouts and named their car the Century.

In July 1901, the company had such a demand for the output of the factory that the stockholders increased capital and proposed to increase the capacity of the plant in East Water Street.

In the beginning, Century manufactured both an electric and a steam-powered runabout. The steam engine was a two-cylinder vertical marine type that was almost five-horsepower. An incline shaft drive to the rear axle was an unusual feature of the Century, which could maintain 25 miles per hour (40 km/h) at 175 psi of steam produced in its water-tube boiler.

Instead of the usual chain drive, the Century steamer employed shaft drive and a bevel gear drive, a very modern solution.

By May 21, 1901, William Van Wagoner was manager. The company's machinists went on strike and Van Wagoner made an announcement to The Post-Standard reporter that the firm was going to "shut down immediately" for an indefinite period. He expressed that they were a new company, still in their infancy and could not afford the "new schedule." Fifty men lost their jobs.

The next day, on May 22, Van Wagoner announced that a number of men employed at the factory on East Water Street who were locked out had returned to work, and that the factory would be "running again today." He said that a number of the non-union men had signed an agreement to go out with the union machinists if their demands were not granted. Many of the men had since "asked to be reinstated" and the plant had run the day before with a few of the men working.

On May 27, 1902, William Van Wagoner took a trip to Auburn, New York, in a vehicle he designed that was manufactured by Century Motor Vehicle Company. He was joined on that "unpleasant day" by John Maxwell, casket manufacturer from Oneida, New York. Van Wagoner's goal was to try for a record of a mile in 58 seconds.

By January 1903, the company switched to production of gasoline-fueled automobiles with a model called the Century Tourist which was equipped with a single-cylinder, water-cooled internal combustion engine of seven-horsepower. The car had a newly designed carburetor and a planetary gear system which had two speeds; forward and reverse. The wheels were 28-inch (710 mm) in diameter, fitted with 3-inch (76 mm) detachable tires. The wheelbase was 6 feet (1.8 m) and the power equipment was hung on a 2-inch (51 mm) steel I-beam frame, on which the body also rested. The power equipment could be removed by taking out eight bolts. The car weighed 1,100 pounds and had a maximum speed of 22 miles per hour (35 km/h).

In April 1903, the company advertised their latest model, the Century Tourist for $750. The car was described as having a "roomy body, with a wide and comfortable seat, an unusually long wheelbase, complete with the Century spring suspension, on four long and elastic springs." The vehicle was "carefully designed" after years of experience in motor vehicle building and thoroughly tested for months before it was placed upon the market. It had a one-cylinder water-cooled motor of seven-horsepower which "runs with little noise or vibration." The company bragged that the motor "can be started from the ground or seat" and due to a new starting device, a "back kick" was now impossible. The body could be removed from the steel frame by removing eight bolts and the gasoline tank capacity was enough for a run of 175 miles (282 km). The box front was entirely designed for luggage and every part in the car was interchangeable. The transmission and power equipment was easily accessible and one level controlled two-speeds forward and reverse. The car also had two double-acting brakes and 28-inch (710 mm) artillery wheels and 3-inch (76 mm) detachable tires. The engine and body were all built by Century.

A motoring magazine in the early days, announced in January 1902, that the company had purchased the building they were conducting business from. "This gives a first-class factory with opportunity for enlarging same, and the Century product will be pushed with unusual vigor." Century had gone to great expense purchasing new machinery and had one of the "finest automobile plants in the country." The machinery in the building cost $50,000.

Century took enough orders at the New York Auto Show in 1902 to keep its factory busy during the entire year and the automobile world was greatly surprised early in the summer of 1903 that the company had closed its factory and called a meeting of its creditors, offering to settle for 25 cents on a dollar.

In February 1904, the company was forced into insolvency after a petition in involuntary bankruptcy was filed against them in the United States court in Utica, New York following the filing of a judgment by the American Ball Bearing Company of Cleveland, Ohio in the sum of $4,085. There were a total of 188 creditors whose claims were principally for machine parts. The total liabilities amounted to $70,000, of which about $40,000 was for open accounts. The assets of the company were estimated between $50,000 and $60,000. The firm had been in the hands of the creditors since July 1903, when 200 employees were laid off and the manufacture of automobiles ceased. Some of the largest creditors included Crucible Steel Company of America and Gavin Machine Company of New York City. According to the local newspaper; "the stockholders were all Syracuse men."

For a few months, there was discussion of Century Motor Vehicle Company merging with J. S. Leggett's, Iroquois Motor Car Company who manufactured the body for Century, however, that did not occur because Century had too many liabilities.

In the four years of operation, the firm produced an electric, then a steam and finally a gasoline machine. A magazine article noted that "Century not only had a good reputation, but one well deserved, being of good design, with ample power."

"The company produced an excellent gasoline machine but was unable to swing the amount of business it undertook." This fact, coupled with the impossibility to turn out cars at the price which it was estimated they could be produced, forced the company to go out of business "until matters could be straightened out, the probability being that before the new year is far gone either the Century company or a new concern will be turning out automobiles in East Water Street."