Carbon Motors Corporation was an American automotive corporation that developed a purpose-built police car. Founded in Los Angeles, California, by Stacy Dean Stephens and William Santana Li (a former police officer and former Ford executive, respectively) in 2003, the company moved to Atlanta, Georgia, in 2006,where it continued to develop its product and gain investors. In July 2009, the company relocated their headquarters to Connersville, Indiana, with plans to invest $350 million into converting a former Visteon plant there.

On March 7, 2012, media reported that the U.S. government's Department of Energy had denied a loan request of $310 million applied for under the Advanced Technology Vehicle Manufacturing program with Energy Secretary Steven Chu stating that while the DOE would have liked to approve the loan, there was "a responsibility to the taxpayers and they need to make sure it’s written in the statute that there's a reasonable chance of repayment."Carbon Motors officials had worked with the DOE for over the prior two years to address concerns over Carbon Motors' plans. Carbon Motors criticized the Department of Energy's reasons for refusing the loan as politically motivated and related to the 2012 elections. Another Indiana startup, Bright Automotive, was forced to end operations the week before after applying for the same loan in 2008 and being unable to continue waiting for the DOE to act on the application. On March 13, 2012, Secretary Chu testified before a Senate hearing partly related to claims made by Carbon Motors CEO William Santana Li regarding the politicization of loans granted by the Department of Energy stating "Politics is not a factor, period. It has to do with the finances of the company, the viability of the loan."

In early March 2013, Carbon Motors began to remove equipment and vacate the plant in Connersville. The lease on the plant was allowed to expire on March 31, 2013. The company's website and YouTube channel were taken down around the same time. By April 2013, the company effectively shut down.

On May 22, 2013, three former Carbon Motors executives filed a lawsuit against the company for unpaid, deferred wages. 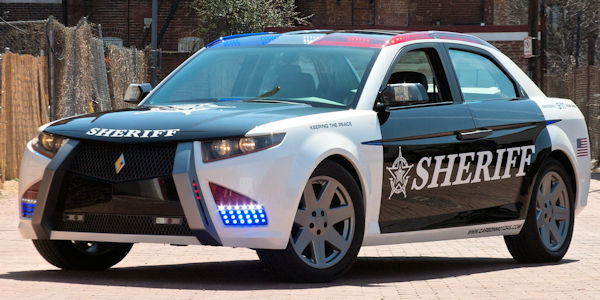 Carbon Motors was formed to develop and produce the E7, the first purpose-built police car ever made. The E7 was to be only available for law enforcement agencies to purchase. The prototype was first revealed in 2008 on the "Pure Justice" tour. The E7 had an expected release date of 2012. It was designed in part by American law enforcement officers for the sole purpose of producing a vehicle to be most effective to police. The company stated that, in order to keep the vehicle out of private ownership, when an agency wishes to dispose of an E7, it would either be sold to another law enforcement agency or returned to the factory to be parted out. The price was intended to be "competitive" considering the cost of equipping a conventional car for police work and how long each vehicle lasts. The Carbon E7 was to be built to last 250,000 miles, compared with 75,000 to 120,000 miles for the typical patrol car.

The vehicle was to be equipped with a BMW straight-six turbo-diesel engine, which is more fuel efficient than current gasoline engine police car engines. It was designed to be rear wheel drive, have a six-speed automatic transmission, be governed to a top speed of 155 mph, and accelerate from 0-60 mph in 6.5 seconds. It also featured numerous safety features, including 75 mph rear-impact crash capability, and optional ballistic protection panels. The vehicle also had law enforcement equipment designed into the vehicle intended to be installed during production so agencies wouldn't need to purchase equipment from other companies and then install them on the vehicle. The front seats of the E7 were designed for comfort while wearing a duty belt.

According to Carbon Motors Corporation, the E7 was to have numerous features and options available, including: