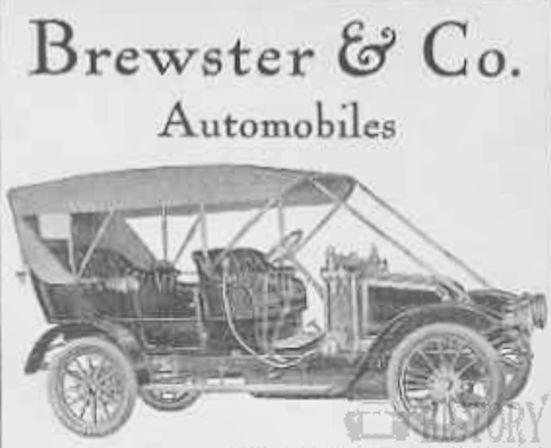 Brewster & Company was an American coachbuilder.Their first known bodywork on an automobile was in 1896, on an electric car, and a gasoline-powered car in 1905. From 1915-1925 and 1934-1935 they produced their own line of opulent and expensive automobiles at their plant in Long Island City. 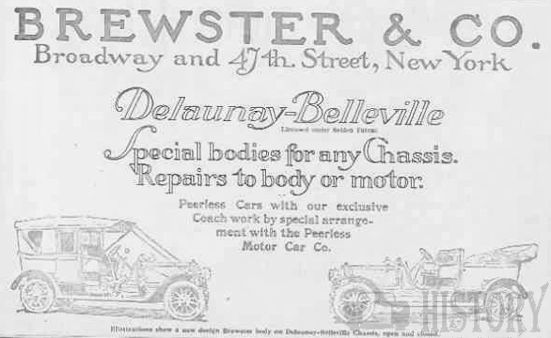 In 1905, Brewster would become importers for Delaunay-Belleville, the most desirable French car of the time. This would mark their first venture into automobile body building, and beginning their history of providing coachwork for prestigious autos.

From 1915 Brewster produced its own cars, called the Brewster Knight, recognizable by their oval radiators, patented leather fenders, and featuring the quiet and costly sleeve-valve Knight engine, until 1925.

Before 1914, most Brewster vehicle sales would be on Delaunay-Bellevilles, along with other French makes. In 1914, Brewster was carefully chosen as sales agents for Rolls-Royce, Ltd. and would be the main body suppliers for Rolls-Royce in the U.S.

By 1925, Brewster's car had few sales, trading with Europe had resumed, and Rolls-Royce of America was expanding and gaining bargaining power against Brewster. Executives from Rolls-Royce of America and Brewster met, and decided on the purchase of Brewster & Co. and their debt. Rolls-Royce would have cars fitted with temporary seats and protection, and driven from their Massachusetts plant to the Brewster Building in Long Island City, New York to have bodies installed. The Rolls-Royce showrooms would soon offer 28 standardized body styles, deliver cars to customers quicker, and for a lower price. Customers would be able to purchase models directly from the showroom as well.

After Rolls-Royce of America folded, from 1931 to 1934 Rolls-Royce Phantom II chassis were shipped directly from Britain to Brewster's large facility in Long Island City by Brewster, as well as by dealers and individuals.

The Ford deal and the End

By this time in the Great Depression, there was strong sentiment against the wealthy (and the archetypal Brewster-bodied Rolls-Royce) and Brewster was not selling well. In 1934 employee J.S. Inskip, who had taken control of operations to save Brewster from the Depression, purchased 135 Ford V8 roadster chassis and designed a body for it, identified by its swoopy fenders and a heart-shaped grille. 15 were made with the 1935 Ford grill. Stylish and sold for only $3,500, it was a hit at the 1934 New York Auto Show. The bodies were worth more than the chassis. These cars were registered as Brewsters and sold at Rolls-Royce showrooms, and were not branded as Fords.

Edsel Ford acquired the first shipped example. A 'one off' custom on a stretched 127-inch wheelbase, a 1934 Brewster Town Cabriolet DeVille (chassis number: 18-802233; engine number: 49493; Brewster build number 9002), which was the third Ford Brewster and the only that did not use the normal Brewster front end. Instead (at Edsel's request) 1934 Ford grill was installed. It is also the only example made with a standard Ford dash instead of the Brewster dash, 16 inch wheels in place of the standard 17s, and a banjo steering wheel. Edsel Ford kept it at a New York Ford Dealer, where he and his family could use it while in New York. In 1939, he had it retrofitted with a 239 Mercury flathead V8 engine that produced nearly 100 horsepower. It is one of Edsel Ford's few personal cars and still survives today in remarkable condition, unrestored. It was presented by RM Auctions at Automobiles of Amelia in 2008 where it sold for $198,000.

Inskip marketed the car to New York celebrities (see Notable Owners), with whom it became popular. The Ford Brewster project was initially profitable. Soon Brewster was taking losses and its bondholders and directors would claim something needed to be done. They insisted on closing down the firm and in July 1935, bankruptcy proceedings were instituted.

On August 18, 1937, the company was sold at public auction. The Rolls-Royce dealership and body business continued on the same premises under the name J S Inskip Inc. run by former sales chief John Inskip. The spun-off Brewster Aeronautical Corporation continued to operate during World War II. 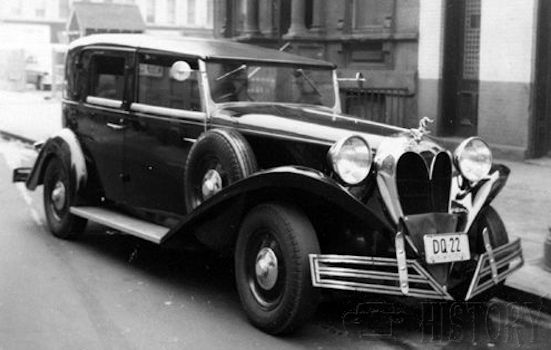