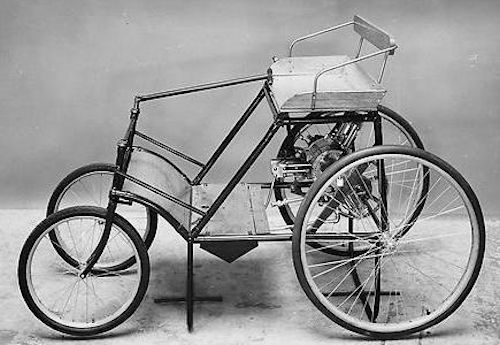 The Balzer Motor Company of Bronx, New York, was founded in 1894 by Stephen Marius Balzer

Stephen Balzer immigrated in the 1870s from the Kingdom of Hungary to the USA. He apprenticed as a watchmaker at Tiffany's. When he started his own business in 1894, a machine shop,he already held several patents for mechanical devices, among them a device for making milling cutters and his rotary engine. In the same year, he completed his first prototype automobile, a motorized quadricycle with a tube chassis, less than 6 ft long and 3 ft wide. It had a rotary, air-cooled, 3-cylinder engine, mounted vertically in the rear and revolving around a fixed crankshaft. Turning with the crank case was a stub shaft. It further had a 3-speed manual transmission with no reverse. One lever engaged speeds and clutch. Each front wheel had its own bicycle fork axle which were connected by a bar which was operated by a tiller) By 1897, he had built three cars.

He developed also 5-cylinder rotary engines. When Smithsonian Institution Secretary Samuel P. Langley learned about these vehicles and their engine in 1898, he contacted Balzer, ordering one for his experimental airplane. Balzer had problems finishing this engine, delivering finally not earlier than 1900. For proper use, Langley's technical assistant, Charles M. Manly had to modify it heavily. Thus, it became the Manly–Balzer engine, the first purpose-built aero-engine.

But his business was not very successful, and he left in 1902. He still worked as a mechanic, and in 1940 he died.