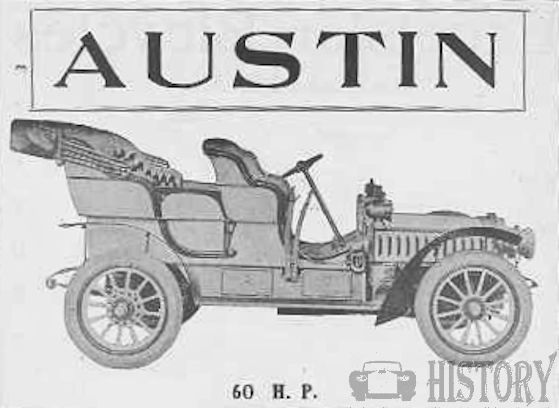 The Austin was a brass era American automobile manufactured in Grand Rapids, Michigan from 1901 to 1921. The company, founded by James E. Austin and his son Walter Austin, built large, expensive and powerful touring cars with an unusual double cantilever rear spring arrangement placing the rear wheels behind (sometimes well behind) the passenger compartment, for a longer wheelbase to improve rider comfort in an era of rough roads as well as a unique two-speed rear axle.

The first car, introduced in 1902, was a two-cylinder model with the 16 hp engine under the seat driving the rear wheels through an epicyclic gearbox and chains. It was considerably larger than most other makes of the day. For several years, colors were optional, but most were painted either white with tan trim or light brown. After about 10 were sold they moved to larger engines and shaft drive. Four cylinder models followed in 1904 rated at 35 or 50 hp.

In 1917 the company offered a V-12 model of the "Highway King", which was made up until production operations ceased in 1920, due to the postwar recession.

Production was never high, running at about 30 cars a year and in total about 1,000 cars were made. After the company closed the Austins moved into the real estate business.