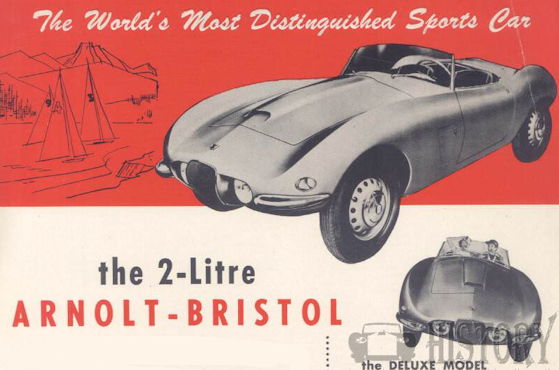 SH Arnolt Inc. of Chicago and Warsaw, Indiana sold four different manufacturer's cars with Bertone bodies during the period 1953 to 1968.

Stanley H. "Wacky" Arnolt was a Chicago industrialist, who began importing foreign cars in the 1950s to the United States. Though sold as American cars, the cars were true hybrids, with British mechanicals, Italian bodywork, and U.S. sales and distribution, as well as in some cases final assembly and body work. SH Arnolt Inc. was a licensed automobile manufacturer in the State of Illinois.

A fortuitous meeting with Bertone at the Turin Auto Show in 1952 resulted in four collaborative efforts between Arnolt and Bertone.

The first was the Arnolt-MG, a four-seater Bertone-bodied car based on the MG TD chassis and XPAG 54hp engine. The Arnolt MG was designed by Giovanni Bertone, his son Nuccio, and Giovanni Michelotti. Of a planned production of 200 cars, 103 have been documented as built between 1953 and 1954 (67 coupes and 36 convertibles). Out of this total, the whereabouts of 36 are unknown and three are known to have been scrapped (as of 1993).

The initial price was $3145. In 1954, MG informed Arnolt that it could no longer supply chassis and engines due to demand for its own complete cars (as well as the replacement of the TD by the TF), so Arnolt began looking for a larger-engined car.

An attempt to build a Bertone-bodied Aston Martin DB2/4 and sell it as an Arnolt Aston was stopped by Aston Martin after three cars were built. There were three Arnolt Astons designed by Bertone's fresh new designer - Franco Scaglione (chassis numbers LML50/502, LML 50/505 and LML 50/507). All looked very much like Scaglione's subsequent Arnolt Bristol, having sharply creased fender lines, and were open cars without hardtops. There were four additional Bertone Astons that were commissioned at Arnolt's request and went through Arnolt's hands. These four cars are sometimes mistakenly referred to as Arnolt Astons, but are not. These were 3 roadsters and 1 coupe. All of the seven Arnolt Astons still exist. One article refers to a possible eighth car, perhaps destroyed in the Chicago fire at Arnolt's factory. The cars were fitted with Aston's 125 hp, 2580 cc engine.

I owned LML 762, the last Arnolt Aston Martin manufactured, for 14 years, 1974 - 1988. Contrary to what is written above it was a TRUE Arnolt Aston Martin. In fact, it was the ONLY car of the 7 or 8 that had an Arnolt Aston Martin Badge. Any of the other cars that had a badge was identified only as an Arnolt. The Arnolt Aston Martin badge has since been copied and can be found on LML 504. The cars were not manufactured in chassis sequence number. The FIRST car built was LML 504, NOT any of the Arnolt-Bristol lookalikes, 502, 505 or 507. The Aston Martin Owner's registry showed that 8 chassis were delivered to Bertone. It was my article that suggested that 8 cars in total were manufactured; this was confirmed by employees at Arnolt's factory in Warsaw Indiana. Finally, while 502, 505 and 507 were originally fitted with the 2.5 liter engine, all were converted to the more powerful 3 liter engine before being sold. I personally inspected three of the other cars, LML 504, 506 and 765, and had extensive correspondence with the owner of 505. 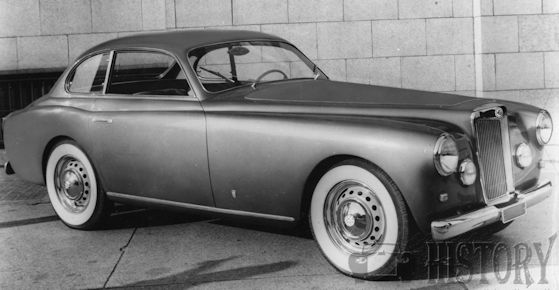 Arnolt also had Bertone design and build a Bentley, which resembles a larger version of the Arnolt MG coupe because it was also penned by Giovanni Michelotti who was working for Bertone at the time. This car was commissioned for SH Arnolt as a personal car. Bertone built the body on a 1953 R Type Continental chassis. The car was fitted with monogrammed flasks and glasses, and a special cosmetics compartment for Mrs. Arnolt. The car was originally painted gold and fitted with tan hides.

Arnolt then negotiated with Bristol Cars Ltd in the UK for the purchase of 200 of their 404 series chassis and 1971 cc, six-cylinder 130 hp engines. According to an article by Wouter Melissen Arnolt needed to find a new chassis source to meet his obligation to Bertone, in whom he had invested heavily, after MG proved unable to fill the original order for 200 cars. The chassis Bristol supplied were sent to Carrozzeria Bertone where they received a highly aerodynamic body with a flowing design that allowed the minimal hood height to clear the cars' three single barrel Solex 32 carburetors. The bodies were designed by Bertone's new designer/aerodynamicist, Franco Scaglione (soon to be famous as the designer of the Alfa Romeo B.A.T. concept cars). The very tall Bristol engine created problems for designing a sleek-looking sports car. Franco Scaglione handled these with particular genius - first by incorporating a hood scoop to lower the surrounding sheet metal, and then by incorporating sharply creased fender lines out over the wheels to draw the eye's attention away from the unusually tall peak in the hood. A few design changes were requested by SH Arnolt.

Arnolt created a racing team for the Sebring 12-hour race, and in 1955, at their first attempt, the special lightweight cars finished first, second and fourth in the Sports 2000 class. The following year they took second and third in class. In 1957 the team withdrew after Bob Goldich's fatal accident on the first lap of his first stint in the car co-driven by Wacky Arnolt,while a privately entered Arnolt Bristol finished fifth in class. 1960 brought a final class win, the team placing 14th, 22d and 39th overall.

The cars were available in four body styles: competition—a stripped road racer; bolide—a slightly better-appointed road racer; deluxe—a better-appointed version of the bolide (side windows and convertible top, instruments mounted in a housing in front of the driver, glove box set in the dash); and coupé, with pop-up headlights. At least one open car was subsequently fitted with a removable hardtop by S.H. Arnolt. Prices as per a 1956 factory letter were $3995 for the competition model, $4245 for the bolide, $4995 for the deluxe and $5995 for the coupe.

Factory options for the Arnolt Bristols included a front sway bar, remote shifter, 11-inch Alfin drum brakes, convertible top, bumpers, Borrani KO steel wheels (nine sets were sold, and one car was sold with Borrani wire wheels) and several different rear end gear ratios. A special racing fuel tank was installed in some of the race cars but was never offered for sale to the public. Late in 1959 and 60, the 12-inch bell-shaped Bristol drum setup was offered, and in 1961 Bristol front disc brakes were offered to retro fit to the Arnolt Bristol. The majority of the cars had steel bodies, with aluminum trunk and hood.

The cars came with an owner's manual, spares manual and shop workbook, as well as a spare wheel and tire and complete tool kit. Additional items such as Arnolt key fobs, neck ties, ice buckets and Arnolt logo head scarves were available from the company. A wide variety of promotional literature, including brochures and postcards, was also produced.

All of the cars were originally sold with Bristol BS1 MkII six-cylinder engines; some have subsequently been fitted with other engines.

All Arnolt Bristols were built between January 14, 1953 and December 12, 1959. The majority were built in 1954 and 1959. A total of 142 cars were produced, of which 12 were written off after a factory fire. The fire-damaged cars were used as a source of spares by Arnolt in later years. The total production included six coupes, and two aluminum alloy-bodied cars. One of the cars was originally right hand drive: the rest were all left hand drive. One of the cars never received a body, and was used as a rolling chassis for auto shows. This chassis is still in the possession of the Arnolt family.

Approximately 85 of the cars are still known to be extant, in conditions that vary from needing complete restoration to concours quality.

Despite the racing successes, the cars did not sell well.

Some of the cars did not sell until after 1960, and the last car to be sold, fitted with four headlights, remained unsold until 1968.

A number of published sources have contained errors on the production numbers of the Arnolt Bristol. In part, this may be because some authors production or sales figures have been compared to existing copies of the SH Arnolt sales ledger. It is important to note that this ledger only records sales of the cars in the United States. As a result, European sales were not included. One result is that several sources claim only three coupes were built, when there were in fact six: one was sold in France and the other two in Spain (the chassis numbers of all of which are recorded in the Bristol Owner's Club registry.) At the Paris Auto Show in 1955, an up-and-coming actor, Lee Marvin, saw the Arnolt Bristol coupe and purchased it. In later years, Marvin would win the Oscar for Best Actor, and after his death, his ultra-rare Arnolt Bristol Coupe (the only Arnolt ever built with the coved front fenders that would inspire the Corvette designers) sold at auction for $451,000.

A second misconception is that the cars were originally fitted with any engines other than the Bristol six-cylinder. All Arnolt Bristols were originally sold with the Bristol engine, and SH Arnolt did not fit any of the 283 Corvette engines some sources claim were sold by the factory. In later years, because of the spacious engine compartment, a variety of engines have been fitted to individual cars, including Chevrolet 283, 350 and 454 engines, and the Pontiac 389.

A third misconception is that SH Arnolt built the cars. The Arnolt Bristol was built in Filton as a powered chassis; the body was fitted by Bertone in Italy, and only final assembly, fitting of options, prep work and (occasionally) paint and upholstery changes were done in Warsaw, Indiana.