The ArBenz was an automobile manufactured in Ohio from 1911 until approximately 1918.

Fred Arbenz and Nand Arbenz formed the Scioto Car Company in 1911,the prototype cars named for the Scioto River flowing through Chillicothe, Ohio, where the car was made. It was manufactured in the factory of the former family furniture business.Engines were 4 cylinder 48 hp but ater a smaler car with a 25hp engine was avalable.

The name was changed to ArBenz in 1912. The capitalization was to suggest association with the Blitzen Benz.

Fred was president and Nand was the designer for the company. C.O. Snyder was hired as chief designer shortly thereafter. The cars produced by the company were all four-cylinders and usually in the mid-price category.

A variety of touring cars and roadsters were produced. The 1916 model was significantly smaller both in size and price than previous models. In March 1916, ArBenz was taken over by the National United Service Company, which was acquiring automotive brands for yet another attempt to take on General Motors. NUSC announced that it would continue ArBenz production, but by 1918 the only cars assembled were from remaining parts. 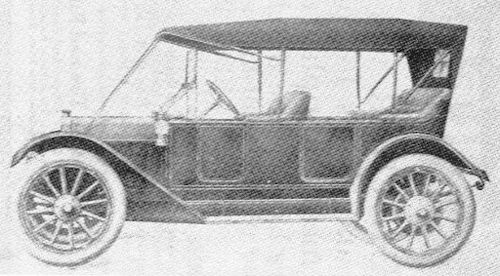