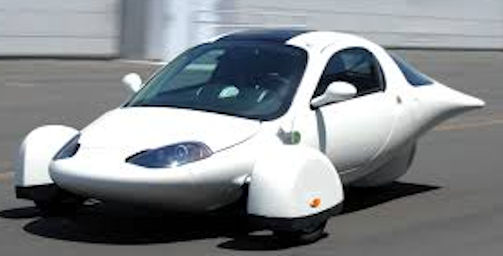 Aptera’s first product, a three-wheeled two-seater named the Aptera 2 Series, was under development. The fuel efficiency of 300 mpg‑US (0.78 L/100 km) when plugged in every 120 miles (190 km) would make it one of the most fuel-efficient cars in the world. This is without accounting for any fuel used for generating the power that charges the batteries. If that is provided for, the equation could stand significantly altered, depending on the source of the energy.

The name Aptera is Greek for “wingless,” a nod to their light-aircraft-inspired design and construction techniques, and is correctly pluralized either as 'Apterae' or ‘Apteras.’ However, Aptera Motors maintains that Aptera translates to “wingless flight.”

The Mk-0 technology demonstrator was unveiled at the TED Conference in March 2007.

In August 2007, it was announced that Aptera was one of the first 30 participants in the Progressive Insurance Automotive X Prize, where they were considered a front-runner in the alternate class. Aptera made it to the finals of the event in 2010, where they failed to finish the performance race due to a battery overload from the regenerative braking system. During validation, the competing vehicle was independently measured to have energy efficiency of 195 MPGe.

On April 22, 2008, Aptera announced that Neil Hannemann, who previously led a number of projects including the Dodge Viper, the Ford GT, and the Saleen S7, was hired as Senior Vice President of Program Management & Manufacturing.

On September 3, 2008, Aptera revealed that Steve Fambro hired Paul Wilbur as Aptera’s new CEO and assumed the title of Chief Technical Officer. This led some to speculate that Fambro would be ousted, similar to Martin Eberhard of Tesla Motors and Daniel Riegert of Phoenix Motorcars. Shortly thereafter, Marques McCammon, who previously worked with Wilbur at both American Specialty Cars and Saleen, Inc., replaced Tony Kirton as CMO, and David Oakley replaced Neil Hannemann as senior VP of Manufacturing. David Oakley and founders Steve Fambro and Chris Anthony left the company at the end of 2009.

Chief Engineer Tom Reichenbach joined the company in October 2008. He was formerly Vehicle Engineering Manager for both the Ford GT and the Shelby GT 500.

On March 11, 2009, the federal government summarily denied loans to Aptera Motors under the Advanced Technology Vehicles Manufacturing Loan Program, due to wording which limited loans to four-wheeled vehicle research and production. After a lobbying effort which changed the wording of the bill to allow high-mileage three-wheeled vehicles, Aptera Corp. reapplied for federal government loans from the Dept. of Energy as of October 30, 2009. The amount requested was $184 million.

On December 2, 2011, Aptera Motors announced it was going out of business due to lack of financing to continue development of its electric cars.

On June 9, 2013, Zaptera USA announced it would split into two companies: the existing Jonway-owned Zaptera USA, and the completely independent Aptera USA.

The Aptera 2 Series was a two-seat, three-wheeled passenger vehicle. It was planned to be available in both all-electric (2e) and series hybrid (2h) configurations, at prices ranging from mid-twenty to mid-forty thousand dollars. By mid-2008, aerodynamic optimization using simulations and light-weight composite construction yielded a prototype which allegedly consumed only 80 Wh/mi (watt hours per mile) (50 Wh/km) at 55 mph (89 km/h), less than half the energy needed to propel the EV1 or the Tesla. The April 14, 2010 press release revised the design intent vehicle efficiency estimate to about 200 Wh/mi (125 Wh/km), 100-mile (160 km) range from a full 20 kWh battery pack, or around 200 mpg‑US (1.2 L/100 km) equivalent. On the hybrid vehicle, it led to projections of 130 miles per US gallon (1.8 L/100 km) on gasoline alone, or 300 mpg‑US (0.78 L/100 km) if plugged in every 120 miles (190 km). Since then, the vehicle underwent a series of redesigns, including the addition of side mirrors and expansion of the interior space, however, retaining its three-wheel configuration and its aerodynamic teardrop shape. At the Automotive X-Prize, the entered prototype had a tested efficiency of 200 MPGe.

Aptera Motors emphasized that safety was not traded off for efficiency, citing crash test simulations and component crush testing as indicating excellent survivability–on par with more conventional vehicles. The company folded before real-world crash test results were made.

Aptera Motors' vehicle design has undergone several design revisions, summarized here. These vehicles are not intended for production, but are presented for completeness and to avoid confusion with earlier, outdated designs.

Aptera’s introductory press release claimed their design would achieve 330 mpg, and included computer renderings of the proposed vehicle. The body shape was initially estimated to have a drag coefficient of Cd=0.055 to 0.06, and would have sported a 12 horsepower (9 kW) diesel engine and a 24 horsepower (18 kW) permanent magnet DC motor. The design also called for a CVT and ultracapacitors, and sell for under US$20,000.

The Mk-0 technology demonstration vehicle was built to confirm the effectiveness of the design, and in the words of co-founder Chris Anthony, “just to show people that we weren't full of crap.” Due to its higher than expected drag coefficient of 0.11, it only achieved 230 mpg‑US (1.0 L/100 km) at 55 mph (89 km/h). The target price was unchanged at “around $20,000.”

In September 2007, the Aptera Motors website was updated with information on the new Aptera design (dubbed the Aptera Typ-1), and the Mk-1 pre-production prototype was unveiled. The Mk-0 prototype was redesigned by Jason Hill, who worked on the Smart Fortwo and Porsche Carrera GT, with a finished interior and new body styling. At this time, Aptera Motors started to take reservations from residents of California for its pilot models – then called the Typ-1e and Typ-1h. A gasoline engine was used, due to the way diesel emissions are calculated.

In February 2008, the Mk-1 was featured in an advertisement for Touchstone Energy Cooperatives.

The Aptera Typ-1 design was superseded by the Aptera 2e. Differences included front-wheel drive, the addition of side-view mirrors, a redesigned interior, and consolidating the rear-view cameras into a wide-angle “fin” on the roof.

Fambro himself invested around US$100,000 to found Aptera Motors. Idealab invested “about $1 million,” and “more than $1 million” came from Esenjay Explorations CEO Michael Johnson. In July 2008 Google.org invested US$2.75 million, with the total for the Series “C” investments of about US$24 million.

Between mid-2007 and August 2008, Aptera Motors received around 4000 refundable deposits for the Aptera 2e and Aptera 2h from California residents, approximately two thirds of those for hybrids. The rate of accrual of new deposits slowed dramatically in the wake of the onset of the 2008–09 recession and the oil price crash. As of January 2010, the number of unique deposits tracked at the unofficial Aptera forum surpassed 5000. Accounting for cancellations, it was stated by the company that, by mid-March, there were only 3,100 deposits remaining, 1,300 of them for the initial 2e configuration.

Aptera had a history of production delays. The original promised first shipment deadline by the end of 2008 was extended a year after new management brought on in 2008 forced a redesign to incorporate more consumer-friendly features, such as front-wheel drive and roll-down windows. The revised deadline of October 2009 was missed due to continuing redesign and lack of funding. After stripping the company to a 30-person core team focussed entirely on 2e production, the target date for 2e delivery was moved to 2010, pending further funding, such as approval of Aptera's DOE loan resubmission. Other development programs, such as the 2h plugin hybrid version and future four-seat passenger version, were put on hold. It was also revealed in the December 2009 newsletter that the composite body manufacturing was outsourced to Energetx Composites of Holland, Michigan.

The California-based company opened a pre-ordering process for residents of California, but stopped taking deposits in July 2011. On August 12, 2011, Aptera started to return all deposits from customers who had signed up to buy an Aptera 2e electric car or the planned 2h hybrid. Yet - not all depositors received their refunds with the company not returning calls.

On December 2, 2011, Aptera went into chapter 7 liquidation. In 2013, an announcement was made that a new company, Aptera USA, would be created to bring the Aptera vehicles into production. It split from Zaptera USA, which is mostly Chinese owned, with Its primary shareholder the Chinese auto manufacturer Jonway. Aptera USA is to be entirely based in the United States and intends to manufacture its cars by hand. 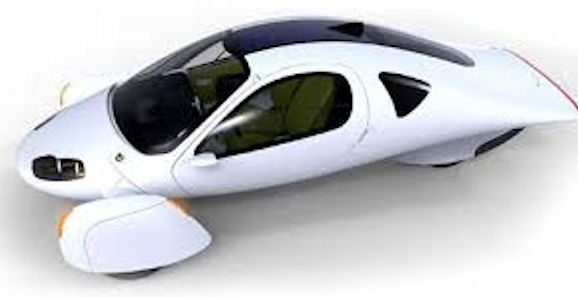