American Automotive manufacturer Michigan From 1954 to 1988 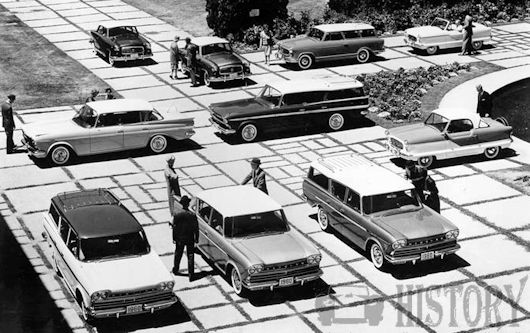 American Motors Corporation (AMC) was an American automobile company formed by the 1954 merger of Nash-Kelvinator Corporation and Hudson Motor Car Company. At the time, it was the largest corporate merger in U.S. history. 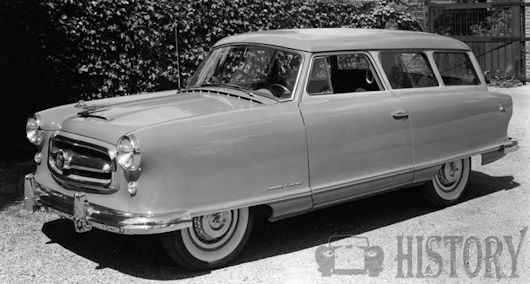 The 1954 merger of Nash-Kelvinator Corporation and Hudson Motor Car Company, and the creation of American Motors, was led by George W. Mason to reap benefits from the strengths of the two firms to battle the much larger "Big Three" automakers (General Motors, Ford, and Chrysler).

The fast-selling Rambler model was sold as both a Nash and a Hudson in 1955 and 1956. These badge-engineered Ramblers, along with similar Metropolitans, were identical save for hubcaps, nameplates, and other minor trim details.

Within a year, George W. Romney, future governor of Michigan, took over, reorganizing the company and focusing AMC's future on a new small car line. By the end of 1957 the original Nash and Hudson brands were completely phased out.

For the 1958 model year, the Nash and Hudson brands were dropped. Rambler became a marque in its own right and the mainstay of the company. The popular British-built Metropolitan subcompact continued as a standalone brand until it was discontinued in 1961.

American Motors was also beginning to experiment in non-gasoline powered automobiles. On April 1, 1959, AMC and Sonotone Corporation announced a joint research effort to consider producing an electric car that was to be powered by a "self-charging" battery. Sonotone had the technology for making sintered plate nickel–cadmium batteries that can be recharged very rapidly and are lighter than a typical automobile lead–acid battery.

1960,AMC was the third most popular brand of automobile in the United States, behind Ford and Chevrolet. After two model years (1963 and 1964) of only producing compact cars, AMC focused back to larger and more profitable cars like the Ambassador line from the perceived negative of the Rambler's economy car image. In the face of deteriorating financial and market positions, Roy D. Chapin, Jr., took charge to revitalize the company, and designer Richard A. Teague economized by developing several vehicles from common stampings. While prices and costs were cut, new and more sporty automobiles were introduced, and from 1968 AMC became known for the Javelin and AMX muscle cars.

American Motors did not have their own electric car program as did the Big Three, and after some negotiation a contract was drawn in 1967 with Gulton Industries to develop a new battery based on lithium and a speed controller designed by Victor Wouk. A nickel-cadmium battery powered 1969 Rambler station wagon demonstrated the power systems that according to the scientist was a "wonderful car". This was also the start of other "plug-in"-type experimental AMC vehicles developed with Gulton – the Amitron and the Electron 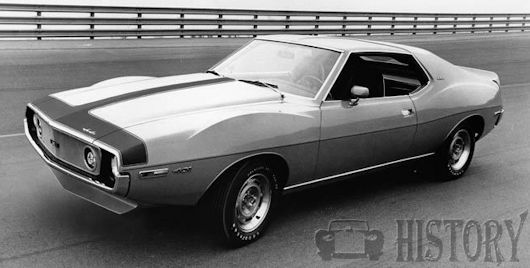 AMC purchased Kaiser's Jeep utility vehicle operations in 1970 (formerly Willys-Overland) to complement its existing passenger car business. Beginning in the early 1970s, This added the iconic Jeep brand of light trucks and SUVs, as well as Kaiser-Jeep's lucrative government contracts – notably the military Jeeps, the company moved towards all-new compact car designs based on the Hornet, including the Hornet itself and the Gremlin. Other new models in the 1970s included the Matador and Pacer. In an effort to create a more efficient cost structure, in the 1979 model year, AMC eliminated the Matador line and then in the 1980 model year, eliminated the Pacer, focusing almost exclusively on its Hornet-based cars and the Jeep line. While the new lines of the late 1970s, such as the Spirit and Concord, were variations on the Hornet's platform, the company continued with innovations on existing designs: the 4-wheel-drive AMC Eagle, introduced in 1979, was one of the first true crossovers.

In 1974, AMC's AM General subsidiary began building urban transit buses in cooperation with Flyer Industries of Winnipeg, Manitoba. The Metropolitan coach had sold 5,212 units when production ceased in 1978.

On March 31, 1978, AMC and Renault announced a sweeping agreement for the joint manufacture and distribution of cars and trucks that would achieve benefits for both. A month later, AMC announced that it would halt the production of standard urban transit buses after about 4,300 were sold by its AM General subsidiary during three years. In May 1978, the U.S. Environmental Protection Agency ordered the recall of all AMC's 1976 cars (except those conforming to California emissions regulations) – some 270,000 vehicles— plus 40,000 1975 and 1976 Jeeps and mini trucks, for correction of a fault in the pollution control system.

After periods of intermittent but unsustained success, Renault acquired a major interest in AMC in 1979 — and the company was ultimately acquired by Chrysler.

In 1980, all American Motors cars received a new rust-proofing process called Ziebart Factory Rust Protection. This included aluminized trim screws, plastic inner fender liners, galvanized steel in every exterior body panel, ankd a deep-dip (up to the window line) bath in epoxy-based primer. AMC backed up the rust protection program with a 5-year "No Rust Thru" component to its comprehensive "Buyer Protection Plan".

AMC facilities were used to produce Renault Alliance and Encore compact and subcompact cars. In 1985 Chrysler entered an agreement with AMC to produce Dodge Diplomats and Plymouth Furys as well as Dodge Omnis and Plymouth Horizons in AMC's Kenosha, Wisconsin plant. At the time, AMC had excess manufacturing capacity, thus contract manufacturing for Chrysler made sense. In 1987, after further new vehicle development that included the Medallion (a re-badged Renault 21) and Giorgietto Giugiaro's Italdesign new full-size front-drive sedan that became the Eagle Premier, Renault sold its 47% ownership stake in AMC to Chrysler. Chrysler made a public offer to purchase all the remaining outstanding shares of AMC stock on the NYSE. Renault left the US market completely as a brand in 1987. The Renault Medallion was sold through the newly formed Jeep Eagle Division of Chrysler as an Eagle, not a Renault. AMC's badge would be used on the Eagle Sports Wagon through the 1988 model year, then be eliminated entirely. The Jeep/Eagle division of Chrysler Corporation was formed from the AMC Jeep Renault dealer network. The Jeep and Eagle vehicles were marketed primarily by former AMC dealers. Ultimately, the Eagle Brand of car would be phased out like Chrysler's DeSoto, Plymouth, and Imperial by 1998.

The Renault Alliance was the first joint product of the AMC-Renault partnership. Introduced in 1983, the Alliance was a front-wheel drive Renault 9 compact car slightly restyled for the American market by Richard Teague mostly to comply with American safety standards and produced by AMC at Kenosha. The car was initially badged as a Renault, and some cars carried both Renault and AMC badges, however most 1986 and all 1987 models had only AMC branding. It was available as a sedan with two or four doors and later as a convertible. The hatchback, introduced in 1984 and badged as the Encore, was basically the same as the European Renault 11 model. For the final 1987 model year, a higher-performance version of the Alliance 2 door sedan and convertible was sold as the GTA. This version had a Renault two liter engine that was exclusive to it and not shared with the European Renault 9 and 11 models.

Problems at Renault and the assassination

American Motors' major stockholder, Renault, itself was experiencing financial troubles of its own in France. The investment in AMC (including construction of a new Canadian assembly plant in Brampton, Ontario) forced cuts at home, resulting in the closure of several French plants and mass layoffs. Renault was down to just three alternatives regarding its American holdings: (1) They could declare AMC officially bankrupt thereby lose its investment; (2) They could come up with more money, but Renault management perceived AMC as a bottomless pit; or (3) AMC could be put up for sale and the French could get back part of their investment. Against these detractions, Renault's chairman, Georges Besse, continued to champion the French firm's future in the North American market; pointing to the company's completion of the newest and most-advanced automotive assembly plant in North America, then known as Bramalea Assembly, as well as the recent introduction of the thoroughly modern, fuel-injected 4.0 L and 2.5 L engines. In addition, Jeep vehicles were riding an unprecedented surge in demand. It seemed to Besse and others that AMC was on course for profitability.

However, on November 17, 1986, Georges Besse, who had a high-profile among French capitalists, was assassinated by Action Directe, a clandestine militant extremist group variously described as communist, anarchist and Maoist, which professed strong sympathies for the proletariat and the aspirations of the Third World. The murder was carried out by members of Action Directe's Pierre Overney Commando (named after a Maoist militant killed by a Renault factory guard). The group stated that the murder was in retaliation for Besse having sacked tens of thousands of workers – 34,000 from the French aluminum producer PUK-Péchiney and 25,000 from Renault.

The earlier agreement between Chrysler and AMC in 1985, under which AMC would produce M-body chassis rear-drive large cars for two years from 1986–88, fed the rumor that Chrysler was about to buy AMC. According to the head of manufacturing for Chrysler at the time, Stephan Sharf, the existing relationship with AMC producing a car for a competitor facilitated the negotiations.

The Jeep Grand Cherokee was the driving force behind Chrysler's buyout of AMC; Lee Iacocca wanted the design. Chrysler completed development and released it to the public in late 1992, and continues to use the nameplate today.

On March 9, 1987, Chrysler agreed to buy Renault's share in AMC, plus all the remaining shares, for about US$1.5 billion (US$3,162,126,538 in 2017 dollars). AMC became the Jeep-Eagle division of Chrysler. It was the Jeep brand that Chrysler CEO Lee Iacocca really wanted – in particular the ZJ Grand Cherokee, then under development by Jeep engineers, which ultimately proved highly profitable for Chrysler (the nameplate remains in production today). However, the buyout included other attractive deal sweeteners for Chrysler. Among them was the world-class, brand-new manufacturing plant in Bramalea, Ontario, which offered Iacocca an unprecedented opportunity to increase his company's production capacity at a fire-sale price. AMC had designed and built the plant in anticipation of building the Renault 25 based Eagle Premier. Additional profitable acquisitions were the AMC dealer network (the addition of which strengthened Chrysler's retail distribution – many AMC dealers switched to selling Chrysler products); and AMC's underrated organization and management talent – which Chrysler quickly assimilated (numerous leading Chrysler engineers and executives were ex-AMC). AMC was fully merged as of March 29, 1990.

The sale came at a time when the automotive press was enthusiastic about the proposed 1988 lineup of Renault, Eagle and Jeep vehicles, and reports that the financial outlook for the tiny automaker were improving. AMC quarterly results for all of 1987 were positive, Chrysler purchased AMC at a time the company appeared to be in very good financial position with its new product line.

The sale marked Renault's withdrawal from the North American market (excluding Mexico) in the 1988.

Earlier use of the name

The era of 1900 to 1925 saw various corporations, in several U.S. states, use similar "American" names, such as American Motor Carriage Company (Ohio, 1902–1903), American Automobile Manufacturing Company (Indiana, 1911–1912), and American Motors Incorporated (New York, 1919–1920). In 1916, an earlier "American Motors Corporation", apparently unrelated to the more famous later corporation of the same name, was formed in Newark, New Jersey, with Louis Chevrolet as vice president and chief engineer. By 1918 it was producing cars in a plant at Plainfield, New Jersey. In 1923 it merged with the Bessemer Motor Truck Company of Pennsylvania into Bessemer–American Motors Corporation.