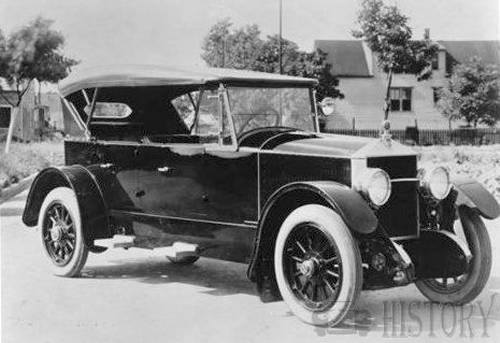 Ambassador was an automobile produced by the Yellow Cab Manufacturing Company of Chicago, Illinois, U.S., between 1921 and 1925.

Initially sold for use as a taxicab, the Model D-1 was introduced as a "drive-yourself" model in 1924.

Yellow Cab introduced the "Ambassador" in 1921 and "explained that this car was being made up to order". The Ambassador was available as a 4-passenger sport or 7-passenger touring for US$4,500, as well as a Berlin limousine or sedan for $6,500. All featured a 136-inch (3,454 mm) wheelbase and a special 6-cylinder Continental L-head (Flathead engine) engine.1921 appeared the Model R and stood until 1923 in the assortment. A six-cylinder engine from Continental with 75 hp power drove the vehicles. The wheelbase was 345 cm. The choice was a two-seat Roadster , a sporty inserted touring car with four seats, another touring car with seven seats and two different seven-seater sedans. Many vehicles were used as taxis .

In 1925 Yellow Cab was taken over by General Motors. John D. Hertz remained as president and the Ambassador D-1 model became the "Hertz". Apart from a larger engine in 1927, production continued with little change until 1928. Most were sedans, although other body styles were available.

John Daniel Hertz led the Chicago- based company in Illinois . In 1921, the Walden W. Shaw Livery Corporation was taken from the same city. This started the production of automobiles. The brand name was until 1925 Ambassador and from 1924 Hertz . In 1927 the production ended.

1924 followed by the smaller model D-1 . The wheelbase was only 290 cm. The six-cylinder engine made 25 hp. Available were sedan and touring car. Thought the vehicle was as a rental car