The Allen was an American automobile, built at Fostoria, Ohio between 1913 and 1921

valve Sommers four-cylinder engines, and acquired that company in 1915.

The 1920 Allen 43 was a handsome craft, featuring sided touring coachwork and a high-shouldered radiator. 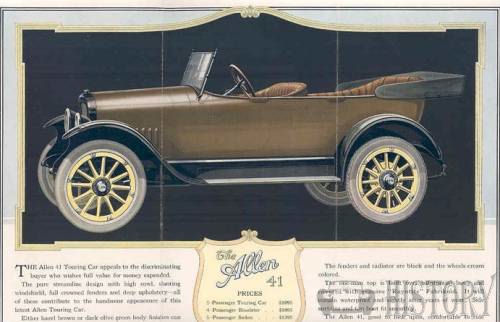 Unfortunately, sales of this vehicle were not enough to avert the company's bankruptcy, which followed in 1921.

Willys acquired what little was left. Overall, 20,00 vehicles were sold.

Confusingly, there was another American company called  Allen from Pennsylvania , also in 1913,