Aerocar International's Aerocar (often called the Taylor Aerocar) was an American roadable aircraft, designed and built by Moulton Taylor in Longview, Washington, in 1949. Although six examples were built, the Aerocar never entered production.09Design and development

Taylor's design of a roadable aircraft dates back to 1946. During a trip to Delaware, he met inventor Robert E. Fulton, Jr., who had designed an earlier roadable airplane, the Airphibian. Taylor recognized that the detachable wings of Fulton’s design would be better replaced by folding wings. His prototype Aerocar utilized folding wings that allowed the road vehicle to be converted into flight mode in five minutes by one person. When the rear license plate was flipped up, the operator could connect the propeller shaft and attach a pusher propeller. The same engine drove the front wheels through a three-speed manual transmission. When operated as an aircraft, the road transmission was simply left in neutral (though backing up during taxiing was possible by the using the reverse gear.) On the road, the wings and tail unit were designed to be towed behind the vehicle. Aerocars could drive up to 60 miles per hour and have a top airspeed of 110 miles per hour.

Civil certification was gained in 1956 under the auspices of the Civil Aeronautics Administration (CAA), and Taylor reached a deal with Ling-Temco-Vought for serial production on the proviso that he was able to attract 500 orders. When he was able to find only half that number of buyers, plans for production ended, and only six examples were built, with one still flying as of 2008 and another rebuilt by Taylor into the only Aerocar III. In 2013, the Disney film, Planes honored the design with a character based on the aerocar, Franz aka Fliegenhosen. 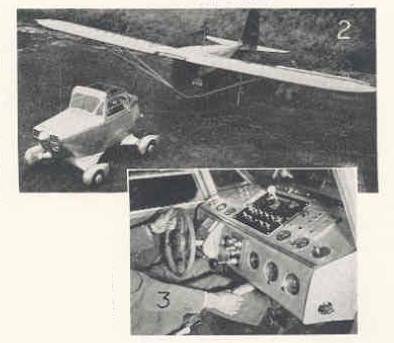 N4994P (1949, originally N31214) is yellow with silver wings. It was the very first Aerocar and is on display at the EAA AirVenture Museum in Oshkosh, Wisconsin.

N101D (1954) is owned by Greg Herrick's Yellowstone Aviation Inc.  It is maintained in flying condition and is on display at the Golden Wings Flying Museum located on the south west side of the Anoka County-Blaine Airport in Minneapolis. This aircraft is featured flying overhead on the cover on the book "A Drive In the Clouds" by Jake Schultz. As of December, 2011, N101D is being offered for sale at an asking price of USD1.25 million

N102D (1960) is yellow and green. The last Aerocar built and the only one still flying, it is owned by Ed Sweeney and is on display at the Kissimmee Air Museum located at the Kissimmee Gateway Airport in Kissimmee, Florida. N102D was the only Aerocar built with the larger O-360 Lycoming powerplant giving it much better performance. It was previously owned by actor Bob Cummings, who used it in his TV sitcom The New Bob Cummings Show. It has also appeared in James May's "Big Idea" on BBC2, first aired Sunday September 28, 2008. Inspired by this vehicle, Ed Sweeney is currently developing the Aerocar 2000 via his Aerocar firm.

N103D (1956) has been repainted to red/black with red wings. It has been owned by Carl Felling and Marilyn Stine of Grand Junction, Colorado since 1981. It once flew Fidel Castro's brother, Raúl Castro in Cuba. It hit a horse on the runway and damaged the aircraft.

From 1961-1963 the Aerocar was operated under contract between Star Stations (Don Burden) and Wik's Air Service, Inc. It was used as a traffic-watch (AIRWATCH) aircraft for KISN (910AM) radio station in Portland, Oregon where it was flown by "Scotty Wright" (Scotty Wright was the alias used by the acting pilot of the Aerocar during traffic-watch transmissions). Several pilots provided the AIRWATCH service beginning with World War II veteran pilot Guilford Wikander, President of Wik's Air Service, Inc. Guilford was followed in order by his sister Ruth Wikander, W. John Jacob III, Wayne Nutsch and Alan Maris. Scotty Wright reports Nutsch having 350 flying hours in N103D performing AIRWATCH duty. Traffic reporting was from 7:00 AM–8:30 AM and 4:30 PM–6:00 PM. During the Aerocar's AIRWATCH missions, it was painted white with red hearts and had the letters KISN on the top and bottom of the wings.

The aircraft was equipped with an emergency police/fire receiver for use in reporting emergency events on KISN radio stations broadcast. When flown for KISN it was based at Wik's Air Service, Hillsboro Airport (HIO), Hillsboro Oregon. On one of its more eventful flights for KISN it survived the Columbus Day Storm of 1962 without damage after its evening traffic reporting flight. Ruth Wikander was piloting the aircraft at that particular time and is credited with the successful landing during extreme wind conditions (perhaps more than 100 mph). Ruth Wikander was an active member of the 99's, the International Organization of Women Pilots. In 1962 Ruth Wikander drove the Aerocar as an automobile while trailering the wings in the annual Portland Rose Festival parade.

Last flown in 1977, the aircraft is no longer airworthy and has been in storage ever since. It is currently listed for sale for the price of US$2.2 million.

N107D (1966) is an Aerocar Aero-Plane, or Aerocar II. It is not a roadable aircraft but is based on the original Aerocar design. It uses the wing and tail section from the Aerocar. It seats four and is powered by a 150 hp IO-320 Lycoming engine. Only a single example was built. It is presently located in Colorado Springs, Colorado owned by Ed Sweeney owner of N102D.

The sixth Aerocar (N4345F) is painted red with silver wings. It was the final flying car effort by Moulton Taylor. The vehicle began life as one of the original Aerocars, but Taylor bought it back from a customer after it had been damaged in an accident on the ground in the 1960s. From there, he considerably re-built it as the Aerocar III, replacing the original cabin with a sleeker, more streamlined front wheel drive one (although it still fell far short of the sporty lines that Taylor had originally wanted to give it). The automotive unit weighed 1,100 lbs and was powered by a 140hp Lycoming O-320. The trailer wheels for the wings in towed configuration were deployable from a compartment on the outside of each wing leading edge. The propeller driveshaft contains fine ball bearings that swing outward with centrifugal force, creating stiffness and dampining. Taylor was able to attract some interest from Ford, but ultimately, no production resulted. The single prototype is now displayed at Seattle's Museum of Flight, where it is displayed wearing registration N100D.

The Aerocar car to plane in 3 minutes