Bogdan Corporation (Ukrainian: Корпорація «Богдан» Korporatsiya Bohdan) — a part of the concern Ukrprominvest (Ukrainian: Група «Укрпромінвест») — is a leading Ukrainian automobile-manufacturing group, including several car- and bus-makers of the country. Its most popular model is the Bogdan Isuzu-powered light bus made in Cherkasy. It also makes trolleybuses.

Bogdan Corporation was created in 1992, after the fall of the Soviet Union, by the mergers of some former Soviet enterprises to implement big investment projects dedicated to creating strong and powerful manufacturing of different-type vehicles in Ukraine. Initially, the company was a distributor of various Russian-based vehicles, later selling vehicles by Korean manufacturer, Kia Motors.

In 1998, the company obtained the Cherkasy automobile repair factory that was specializing in repairing buses of the Russian-based Pavlovo Bus Factory and GAZelle.

In 1999, the factory was transformed into the "Cherkasy Autobus" that began manufacturing its own buses, Bogdan. That same year, the company signed another contract with Hyundai for distribution of their vehicles.

In 2000, the company bought the bankrupted Soviet LuAZ based in Lutsk (Volyn Oblast), and during the same period, started to produce its own cars based on the Russian AvtoVAZ. In 2003, the company's began exporting the buses.

In 2004, the company signed a general agreement with Isuzu to use the Isuzu brand on the company's exported buses. In 2005, the company Bogdan Motors became a corporation.

In 2013, Bogdan, in a joint venture with the Polish company Ursus, received an order for 38 trolleybuses for the Lublin, Poland, trolleybus system. The body-and-chassis shells were completed by Bogdan and shipped to an Ursus plant in Lublin, where Ursus would install the axles, electrical equipment, seats and other fittings to complete the vehicles. The first of the 38 Bogdan/Urbus trolleybuses, officially designated as model Ursus T70116, was delivered in mid-2013.

In 2014 the company developed the 'Bars' (panther) multifunctional light armored vehicle to be used by the National Guard of Ukraine.

The facilities of Bogdan Corporation allow to produce 120-150 thousands of cars, up to 9 000 buses and trolleybuses of all types, and around 15 thousands of cargo trucks and specialized equipment a year. Facilities are located in Lutsk, Cherkasy and Crimea.

The group was controlled by politician Petro Poroshenko; who sold his share in connection with the collapse of its production after the 2008 economic crisis in 2009.

Cars and trucks are produced or assembled in Cherkasy. The facilities in Cherkasy are the most modern auto-manufacturing facilities in Ukraine. Car manufacturing launched in 2000. Cherkasy plant allows to produce 120,000-150,000 cars per year. The plant produces/assembles Bogdan 2110, Bogdan 2111, Bogdan 2310 (pick-up), Hyundai Accent, Hyundai Tucson, Hyundai Elantra XD and JAC J5 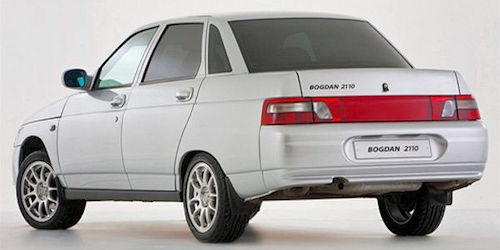