Automotive manufacturer Istanbul , Turkey From 1959 on. 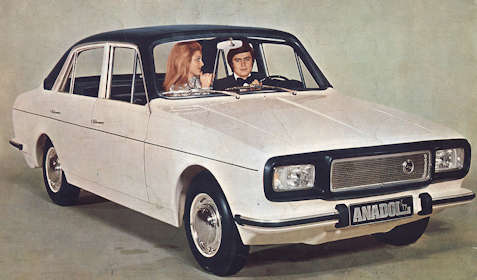 The company Otosan Otomobil Sanayii established in 1959 by Vehbi Koç in Istanbul .  Otosan had contracts with Ford , Ford of Britain and Ford Germany .The first passenger car, the 1963 under the brand name Otosan was presented was for a license from Ford. Between 1966 and 1986 the company also made car brand Anadol . the end of 1970, the annual capacity of the plant was about 6,000 vehicles. The brand name Otosan was dropped later. In 1997 it was renamed Ford Otomotiv Sanayi A.Ş.

Reliant and Ogle Design designed the first model, which appeared in 1966 and went into mass production on December 7, 1966. The body of the saloon consisted of fiberglass . In the early portion of the vehicle domestically produced was 53%.  A four-cylinder engine of Ford Anglia Super 1198 cc displacement drive to the vehicle. From 1969 was a Ford engine with 1300 cc capacity of the standard engine. In 1974, an engine with 1600 cc capacity was available. coupe and station wagonsupplemented the assortment 1986, the car production ended. The Otosan Ford Taunus 1.6 was the successor.

The first model under this brand name was published in 1963. This was the license of the German Ford Taunus 17 M station wagon It is not stated whether it be the then-current Ford P 3 or the previous model Ford P 2 acted.

Next Ford model was the 1985 Otosan Ford Taunus 1.6, which corresponded to the Ford Taunus TC and was initially produced as a four-door sedan . Later was an engine with 2000 cc capacity available. An embodiment as a pick-up followed.