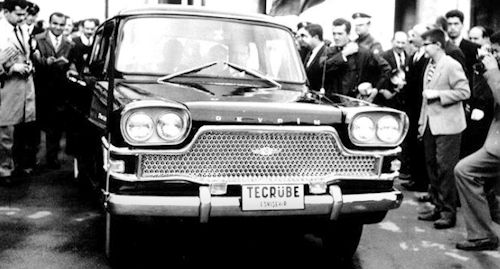 Devrim was the first automobile , which in Turkey was designed and manufactured in the early 1960s

Since 1960 there have been plans for a domestic Turkish automobile production. 1961, President Cemal Gürsel ordered 24 engineers from various factories to be withdrawn from the project to develop and produce a Turkish car. It was to be presented to the public on the day of the Republic on October 29, 1961. Among the engineers was the later Turkish Prime Minister Necmettin Erbakan .

After four and a half months, four prototypes of the vehicle were completed, one in black and three in cream. The model was called Devrim - the Turkish word for "revolution".

Three of the vehicles were transported by rail to Ankara for Republic Day, while the black model was painted while driving. For safety reasons, the cars were filled with only a minimum of fuel for maneuvering. During the festivities, President Gürsel was supposed to make a lap of honor around the parliament building with the black vehicle, but after 100 meters, he stopped with an empty tank. Gursel moved in a creamy white Devrims and drove up to Anıtkabir Mausoleum.

Because of these events during the show, Devrim was the cause of jokes and ridicule for years. The press wrote: "The Devrim drove 100 meters and stopped."

The Devrim was never produced in series, partly because there were hardly any documents or technical drawings for the hand-made prototypes. In addition, there was no functioning supplier industry.  Another reason was the lack of demand; At that time, cars were not affordable to the mass of potential private buyers.

Three of the prototypes were destroyed; the only remaining one is kept in Eskişehir in the Tülomsaş company , where it was built at the time.