Dominic "Dom" Toretto and Brian O'Conner with the rest of their team,  returned to the United States to live normal lives after securing amnesty for their past crimes in the previous Fast & Furious 6 until Deckard Shaw (Statham), a rogue special forces assassin seeking to avenge his comatose younger brother, puts the team in danger once again.Shaw is taken into custody by Hobbs and locked away in a secret, high-security prison. At a beach, Brian and Mia play with their son while Dom, Letty, Roman, Tej, and Ramsey observe, acknowledging that Brian is better off retired with his family.

Mr. Nobody.says that he will assist Dom in stopping Shaw if he helps him obtain God's Eye, a computer program that uses digital devices to track down a person, and save its creator, a hacker named Ramsey, from a mercenary named Mose Jakande. Dom, Brian, Letty, Roman Pearce, and Tej Parker then airdrop their cars over the Caucasus Mountains in Azerbaijan, ambush Jakande's convoy, and rescue Ramsey. The team then heads to Abu Dhabi, where a billionaire has acquired the flash drive containing God's Eye, and manages to steal it from the owner. With God's Eye near telecommunications repeaters, the team tracks down Shaw, who is waiting at a remote factory. Dom, Brian, Nobody and his team attempt to capture Shaw, but are ambushed by Jakande and his men and forced to flee while Jakande obtains God's Eye. At his own request, the injured Nobody is left behind to be evacuated by helicopter while Brian and Dom continue without him. To reduce their disadvantage, the crew returns to Los Angeles to fight Shaw, Jakande and his men. Meanwhile, Brian promises Mia that once they deal with Shaw, he will retire and fully dedicate himself to their family.

Dom silently leaves, Ramsey asks if he's gonna say goodbye. Dom says, "It's never goodbye." He drives away, but Brian catches up with him at a crossroad. As Dom remembers the times that he had with Brian, they bid each other farewell and drive off in separate directions, as the screen fades to "For Paul" written on a white title screen.

A total of 340 cars were used in the film, and more than 230 cars were destroyed in the making of the film, including several black Mercedes-Benz. The film featured the most expensive car destroyed in the franchise so far a Lykan HyperSport by W Motors, valued at $3.4 million.The mountain-highway chase scene on Colorado's Monarch Pass proved to be the most damaging sequence with over 40 vehicles being destroyed. Only 10 percent of the action sequences in the film were computer-generated.It took more than 3,500 man-days to complete the various stunts of the film.

Special made for movie vehicle and 1967 Dodge Charger

Also Made for Movie specials *

The film marks the final film appearance of Walker, who died in a single-vehicle crash on November 30, 2013 with filming only half-completed. Following Walker's death, filming was delayed for script rewrites, and his brothers, Caleb and Cody, were used as stand-ins to complete his remaining scenes. These script rewrites completed the story arcs for both Walker and Brewster's characters.

Furious 7 marked the final film performance of Paul Walker, who died in a car accident on November 30, 2013. The film was dedicated to his memory.

On November 30, 2013, while on a break for the Thanksgiving holiday, Walker, who portrayed Brian O'Conner, died in a single-vehicle accident. The next day, Universal announced that production would continue after a delay that would allow the filmmakers to rework the film. On December 4, 2013, Universal put production on hold indefinitely. Wan later confirmed that the film had not been cancelled. On December 22, 2013, Diesel announced  that the film would be released on April 10, 2015.

In January 2014, Time reported that Walker's character, Brian O'Conner, would be retired instead of killed, and that new scenes would be developed in order to allow the franchise to continue without him. To recreate Walker's likeness, the filmmakers hired Peter Jackson's Weta Digital visual effects house  Initially, what Weta could do was severely constrained by the quality of the reference materials available for Walker's physical appearance.In April 2014, it was reported that Walker's brothers Caleb and Cody had been hired as stand-ins. Their cooperation, along with their strong resemblance to their late brother, enabled the filmmakers to use Walker's likeness throughout the finished film. That is, Weta Digital no longer needed to recreate Walker's entire body from scratch, and could focus on accurately modeling his face.The final film showed Walker's face superimposed over the bodies of his brothers or actor John Brotherton in 350 visual effects shots.260 used a computer-generated face, while 90 repurposed actual footage of Walker's face borrowed from outtakes or older footage. 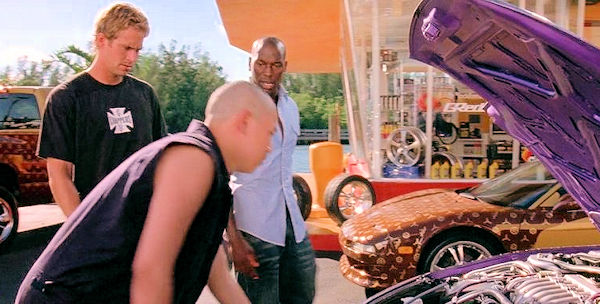