Dom and Letty spend their honeymoon in Havana . To help his cousin, Dom races a race against a local racing ace and wins, destroying his cousin's car. Dom gives him his Impala and waives the won vehicle license of his opponent. Shortly thereafter Dom is visited by a woman and blackmailed.They use the Eye of God to find Cipher and Dom and later use the EMP device to disable security and then to disable a nuclear submarine.

Ciphers team chops countless cars with driver assistance systems in Manhattan .The vehicles driven by the team during the Manhattan action sequence include a 1966 Chevrolet Corvette (Letty); a 2016 Mercedes AMG GT S (Tej and Ramsey); a 2016 Jaguar F-Type (Shaw); a 2016 Bentley Continental GT (Roman); a 2017 Subaru BRZ (Little Nobody); and an International MXT (Hobbs).

For the climactic ice sequence, but the two street models used in it are equipped with all-wheel-drive are a 2003 Lamborghini Murciélago (driven by Roman) and a 2015 Subaru WRX STI (Little Nobody). Hobbs drives an "Ice Ram," a heavily modified Dodge Ram truck with tank-style tracks instead of wheels, and Letty drives a customized 2011 Local Motors Rally Fighter 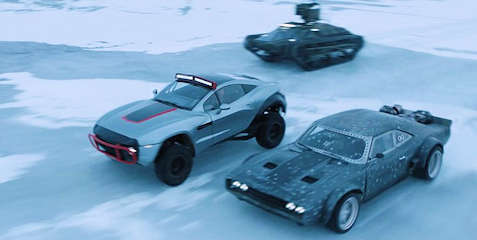 Did you Notice the Fate of the Furious ?

When the crew is shown the garage of all the cars including the Howe & Howe Technologies Ripsaw MS2 army tank, you can see Paul Walker's GTR that his character drove in the 7th instalment up on top of one of the 3 tier car racks. A to the late actor

Dom drives and beats his competitor in reverse. Reverse gear Is similar ratio to that of a single high forward gear. It would be impossible to drive a normal car in reverse and beat someone who is at top speed in a forward gear.

Vin jumps outside of his car at the end of the first race, the curb of the sidewalk and hole of the sewer are very huge, they are a noticable VFX effects fault,

In the chase scene set in Berlin, the team is chased by the police. In Germany.The police vehicles use a very narrow kind of LED flashlight mounted on the roof.  This kind is not used on police vehicles in Germany

The NYPD vehicles used in Manhatten in the chase scene use all blue lights. In reality, NYPD emergency lighting code only use Red and white for forward facing lights, where blue may be expressed only to the rear of the vehicle. NYPD also do not Again use those types of light bars.

Other back ground vehicles.