Coleman Milne is a coachbuilder in the United Kingdom that specialises in converting cars into funeral vehicles, stretched limousines, preparation of police vehicles and other specialist vehicles. Coleman Milne creates, builds, and sells hearses and limousines in the UK.

Coleman Milne was founded by John Coleman and Roderick Milne in 1953. At first they specialised in vehicle body repairs and horse boxes. as far back as 1820,by 1954 They quickly found a niche in using those skills to create limousines and funeral hearses with the Ford mk1 Zephyr and Zodiac .followed by the mk2 versions by 1956,into the 1970s became Ford Granada conversions .By the 1980s Mercedes Benz woud be used. In 1992 a management buy-out resulted in becoming a trading division under the holding company name of Woodall Nicholson Limited.

1977 Range the Dorchester Minister and Grosvenor

Vehicles have also been supplied to British and overseas royal families. They originally stretched the Ford Zephyr, later moving on to the Ford Granada upon which a number of versions such as the Minster, Dorchester, and Grosvenor were based. As of the fall of 1982 the Granada-based Dorchester was also available in an estate version with elongated rear doors, called the "Windsor". 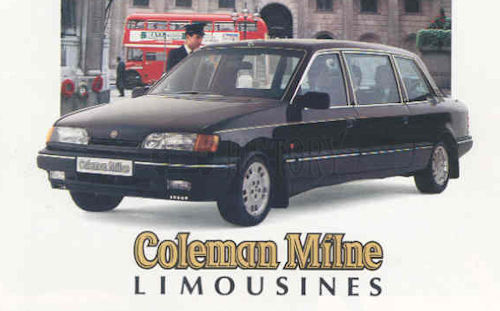