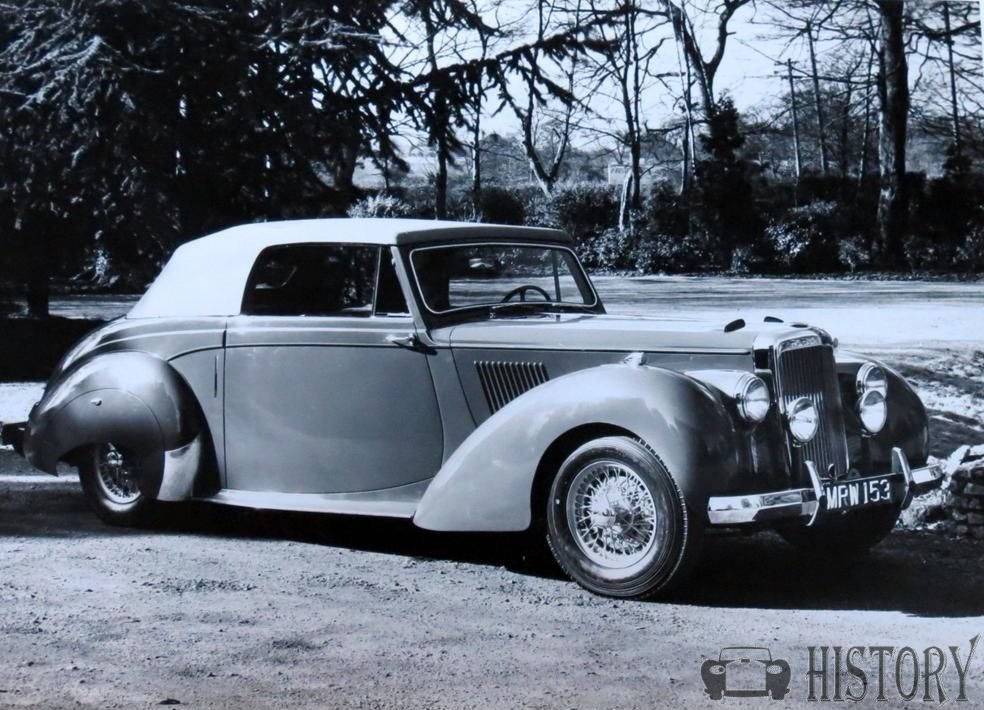 Founded in Leamington Spa early in the 19th century for the custom attracted to the newly fashionable spa by a Northampton coachbuilding family it lost direct ownership and control by Mulliner family interests in 1903 when it was sold to Charles Cammell then merged into Cammell Laird where H H Mulliner ceased to be a main-board director in 1909. The business continued under various ownerships until the end of 1960 when owners Standard-Triumph International closed it down.

Henry's third son, Herbert Hall Mulliner (1861-1924), in the light of the decline in quality of the Spa's visitors moved in 1885 to Birmingham.Following his father's death in November 1887 and consequent rearrangement of family ownershiphe made his home in Rugby and took up other interests including in 1895 the manufacture of scientific instruments. In 1897 he converted the coach and carriage making part of his business to motor vehicle bodies and was then employing 200. Used as well as new carriages were sold from the Mulliner showrooms in Broad Street, Birmingham, and H H Mulliner was the first to offer insurance of his carriages against accidents.

Meanwhile continuing with scientific instruments he began producing in Birmingham with F. Wigley, tools for making the more complicated parts of ordnance and they formed companies: Mulliner Wigley Company Limited formed 1895 and Wigley-Mulliner Engineering Company Limited formed 1897. In April 1899 he married. The demands of the South African War led to major developments and the scene of operation was moved to Coventry to a site of some sixty acres. All the companies were amalgamated with Charles Cammell & Co Limited. In 1903 these companies merged into the newly blended armaments and shipbuilding business, Cammell Laird, of Birkenhead and H H Mulliner joined their main board. The ordnance operation became Coventry Ordnance Works and was separated out and jointly owned by Cammell Laird, Fairfield Shipbuilding and Engineering Company of Glasgow and John Brown & Company of Clydebank with Mulliner as managing director, Wigley was responsible for the technical side.

A special article detailed the background of the origins of H H Mulliner's involvement in the ordnance works in a supplement to The Times 9 June 1909. The main workshop at the Coventry Ordnance works was claimed by The Times in 1909 to cover a greater area under its single (110 feet to the apex) roof than any other factory in the country. The travelling cranes were of 110 tons capacity. It was also notable for the arrangement that machines were brought to the work instead of the work to the machines and several machines could work on the same piece at the same time. The cost of the oil alone to fill the well to harden the largest guns approached £5,000.

In 1908-1909 there was a very public "Mulliner scandal" because H H Mulliner was shown to have embellished reports of German rearmament in the hope of improving their order book for large naval guns. He was asked to tender his resignation from Cammell Laird's board and it was accepted. However he received a settlement of £100,000 which was in addition to the payment of £142,566 for the shares on the merger of the businesses in 1903.

Among H H Mulliner's benefactions were gifts to the Victoria and Albert Museum in 1913 and the purchase in 1920 and "complete modernisation at considerable expense" of Rainham Hall built 1729 in the London Borough of Havering as a setting for part of his outstanding collections of English furniture and English pottery.

H H Mulliner's carriage building business, now part of Cammell Laird, built a few bodies for Daimler before it was decided the future lay in making relatively large production runs for motor companies that did not have their own facilities.

An early contract was gained from Calthorpe, then a booming company, leading to probably the entire output going to them and eventual close financial and corporate links between the two. Mulliners was taken over by Calthorpe Motor Company in 1917.

After Calthorpe failed in 1924, the managing director of Mulliners, Louis Antweiler, who was also on the Calthorpe managing board, arranged to buy the coachbuilding company which he renamed Mulliners Limited. He obtained contracts with Clyno and Austin for whom he made many Weymann style fabric bodies for the Austin 7. When the fashion for fabric bodies declined, the business with Austin went but was replaced by orders from Hillman, Humber, Standard and Lanchester.

In 1929 the company went public. The main business was now with Daimler and Lanchester making the bodies for the cheaper range of cars with, confusingly, Arthur Mulliner of Northampton making the up-market models. Alvis was added to the list of customers.

During World War II they made bodies for military vehicles and troop carrying gliders.

After the war body making for cars resumed with Aston Martin, Armstrong Siddeley and Triumph joining the list of customers. Standard-Triumph had by then a shortage of body making capacity and this led them to buy the company in 1958 by which time Mulliners made 700 car bodies each week.

On 7 December 1960 a shock announcement by Standard-Triumph International, itself about to be sold to prosperous trucks and buses manufacturer Leyland Motors Limited, revealed that the factory would close. "Mulliners Limited, one of the oldest body firms in the motor trade, employs about 800 workers having recently laid off some 750 as redundant because of a shortage of orders". Their products would "continue to be made by other Midlands factories within the S-TI group"